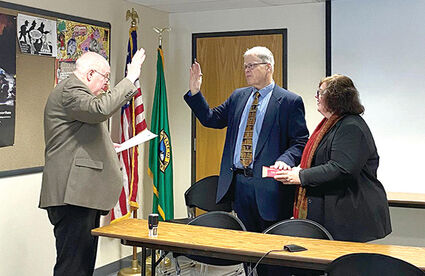 David Olson, center, with wife Dayle at his side, recites his oath of office of mayor with Town Attorney Fred Johnson. Courtesy photo.

Members of the Cathlamet Town Council took a first look at the possible development of a waterfront park at the mouth of Birnie Creek when they met Monday.

The council also gave initial approval to amending the town's speed limit ordinance to accommodate a reduction of speed on SR 4.

New Mayor David Olson presided at the meeting and announced the resignation of Council Member Bill Wainwright, which leaves a vacancy on the five-person board.

"[The year] 2022 starts with a new mayor and council member for the town," Wainwright wrote. "Due to a confluence of several factors, I've decided it best at this time to resign from my position as #2 Town Council member. This is effective immediately.

"The upcoming year looks very opportunistic. I pass along hope that you will all have a great year, with multiple successes as you most effectively move the town forward."

Audrey West of The West Studio landscape architects presented a conceptual design for developing a waterfront park on the site of the town's old sewage treatment plant settling ponds and asked council members what they'd like to see in further detailed planning.

The initial concept also included upgrades to the town's Strong Park, which lies across Birnie Creek from the waterfront park site.

Work is needed to upgrade the existing paths and boardwalk across the Birnie Creek marsh to meet standards in the Americans With Disabilities Act (ADA), she said.

Projects included on the conceptual design included a path to the beach, a wildlife viewing area, amphitheater, commercial zone, and a spur off the boardwalk.

Council members had a couple concerns.

One was parking. The design suggested development of a parking area on 2nd Street near Town Hall; other parking would be along Division Street near the Wahkiakum County Historical Society Museum.

Council Member Laurel Waller commented that there is a fee for parking at the nearby Elochoman Slough Marina, and Division Street is a long walk from the waterfront park site.

"We need more parking," she said.

Council Member Robert Stowe asked about costs and budgeting. West replied that the council needs first to decide what they desire for the park and then go from there.

Raglin suggested incorporating paving bricks and benches that are sponsored by individuals or businesses as a fundraising effort.

The council will hold a workshop session to fine tune the initial concepts, and will invite representatives of other organizations and the public to attend. Olson suggested the work be complete by March so that the town could apply for funding grants and proceed with development of the site.

In other business, the council gave initial approval to lower speed limit on SR 4 from 45 to 35 miles per hour from the Messinger Hill viewpoint to the Fern Hill Road intersection.

The Washington State Department of Transportation (WSDOT) is planning to lower the speed limit and install crosswalks with warning lights at three locations. One location would be at the school district access road; the speed limit in this area would be 20 miles per hour when flashing lights were activated.

The changes stem from consultations involving the town, school district, Wahkiakum County and WSDOT in 2017.

At the start of the meeting, Olson outlined his goals as mayor. They include:

--Suggesting time limits for agenda items in order to speed up meetings;

--Taking action on utility rates to end inequalities in them;

--Completing development of the waterfront and Butler Street park area;

--Moving forward with an update of the town's comprehensive plan and re-establishing the town planning commission;

--Moving forward with repairs at the town dock;

--Working with the town attorney to redefine liaison duties for council members, and

"We can do all these things if we work together," he said.