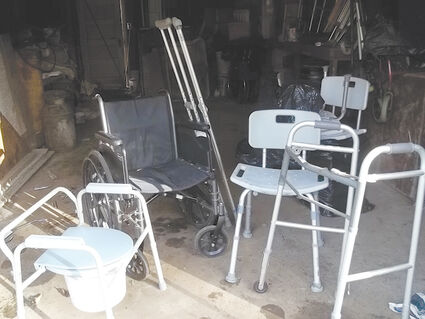 Wahkiakum Lions have collected walkers, wheel chairs and other items the elderly may need and offer them on loan. Courtesy photo.

I became a great big fan of the Lions Club in early November. I found myself in a bit of a bind, unable to travel too far, and looking at a long wait for an online order. I needed a wheelchair and I needed it fast.

It turns out the local Lions Club has been collecting donated wheelchairs, walkers, canes, commodes, bath chairs, and more, for situations similar to mine. They even have a hospital bed available right now, as well as a cart to move oxygen.

The items are available to anyone who needs them. All they ask is that you return them when you don't need them any more.

According to long time member Carol McClain, the local Lions Club decided to start collecting those items after seeing other clubs do so for their communities.

McClain became a member 30 years ago. She first heard of the organization while living in Montana. Her husband was a member, but women could not join at the time.

Years passed and one day while working in Cathlamet, she learned that women could now join and there was a local chapter.

A lot of their focus historically has been on sight and hearing. The clubs collect used eyeglasses and hearing aids, which are sent to a central organization to be recycled and repaired.

Once a month they address applications from people who are seeking assistance for glasses or hearing aids, to help those who qualify get the care and equipment they need.

Used glasses and hearing aids can be donated by leaving them in one of two recycling boxes in Cathlamet. There is one in front of the Cathlamet Pharmacy and another in front of the community center.

They also collect newspapers, which can be left at the Lions Club drop box in the parking lot at the high school in Cathlamet, or at their drop off at the recycling center on Puget Island.

For more information about any of these services, ask a member of the Lions Club, or call Carol McClain at 360-795-3337.

If you would like to join them, their next meeting is January 17 at 7 p.m. at the Puget Island Fire Station, McClain said.