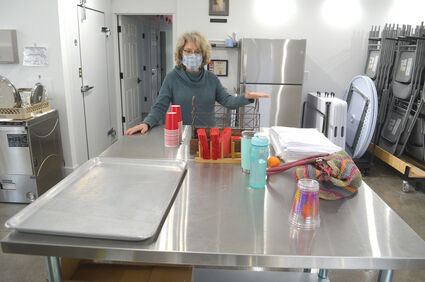 Kathleen McDonald is proud of the new commercial kitchen, which is designed to be flexible for a variety of needs, whether it's for production, catering, or use as a classroom.

There has been a kind of cycle of expansion and contraction at the Little Island Creamery in recent years, as the owners and their employees have sought to define and refine their mission, their dreams, and ultimately their future on Puget Island.

The new Little Island Kitchen and Meeting Rooms is just one more manifestation of their endeavor.

Intially, owner Dick McDonald and his sister, Kathleen, planned to build a store on the property to sell their cheeses and butter, as well as other products made by other people in the community. There had been some interest from those who relied on farmers markets, and even a nearby winery.

But the McDonalds also knew that a store would be a lot more work for the creamery's 12 employees, who were already focused on handling livestock, the grounds and facilities, or the cheese plant. And meanwhile, they heard a repeated question from customers about something entirely different. They decided to answer it.

"We realized a commercial kitchen would be a better asset," Kathleen McDonald said.

McDonald consulted with a restaurant owner and experienced caterer in Portland as she worked on the design for the new building.

"He was just fabulous in telling me what really worked. It's pretty much state of the art," she said.

The kitchen has induction burners, convection ovens, and a salamander broiler, as well as tables, a sink, a walk in cooler and more.

McDonald worked hard to create a flexible and user friendly space for a variety of uses, whether it was for production, catering, or a classroom.

There are two meeting rooms and ready rooms for wedding guests in the new structure. The building can be rented as a whole, or just one room, or two rooms or any variation of what is needed, in four hour blocks.

It joins the other structure on the property, the Little Island Creamery barn with a recently remodeled cheese plant on the first floor and an already popular venue for weddings and other functions upstairs.

The festivities may have slowed during the pandemic, but production hasn't really slowed for the creamery, so much as it has shifted.

"We went through quite a few changes at the creamery. We were making a lot more cheeses than we are now. Our products were popular, but it was hard on the staff." 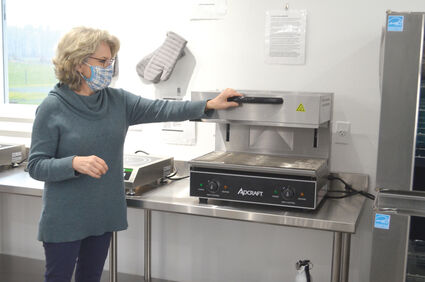 They no longer use goat milk in their process and are milking four cows a day, with plans to add two more sometime this year. They also reduced their offerings to brie, curds, and butter, and made the decision to only sell wholesale, except for what they retail on site.

The creamery sells their products through the Vancouver Farmers Market online and to a dozen vendors between Cathlamet and the coast, all the way down to Manzanita, McDonald said.

"We are trying to make the best product we can," she added. "Everybody works very hard. The feedback on our brie couldn't be better. We literally sell everything we make. It was a good turnaround for us."

McDonald is proud of it all, but she is especially proud of her brother, Dick.

"This is what he is doing in the last chapter of his career, putting his time and energy and whatever he can back into the community," McDonald said. "I'm really proud of him for that."