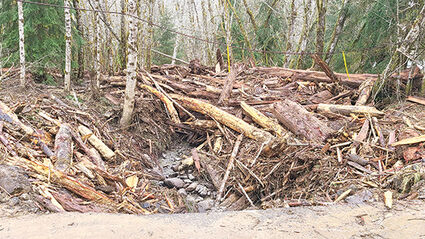 Early January heavy rain melted December snow and sent a torrent of water down the North Fork of Wilson Creek, creating a log jam which diverted the creek and cutting a new channel across East Valley Road.

Residents of Skamokawa's East and Middle valleys on Tuesday asked Wahkiakum County officials to take steps to end threats to their properties resulting from flooding earlier this month.

Marshall and Martina Snow said an emergency culvert repair redirected the course of a Middle Valley creek toward their house, which is now threatened by erosion.

"It is a very severe situation," Marshall Snow said.

They asked that the road department address the situation and return the creek to its previous channel, or at least do something to protect the house.

East Valley resident Treasure Collupy urged the county officials to undertake a project to improve a stream crossing about 6 miles up East Valley road that has had problems in the past.

This month, a torrent plugged the culvert under the road, carrying so much woody debris down the channel that it formed a log jam that sent silt laden water each direction down the road. The diverted water eventually cut through the road in a new location and left residents stranded.

Public Works Director Chuck Beyer said the road crew was acting quickly in a difficult situation at the Middle Valley site. The county engineer was on the scene, and he and the crew made the decision to channel the flooding water where it wanted to go.

He added county officials will meet Friday with staff of the Washington Department of Fish and Wildlife and other agencies to analyze the situation and see what can be done to address that. WDFW, which handles permitting for stream projects, has already been made aware of the situation and seems okay with some protective measures, he said.

"My concern is that if it was something that we've done that affects these folks, that needs to be addressed," he said. 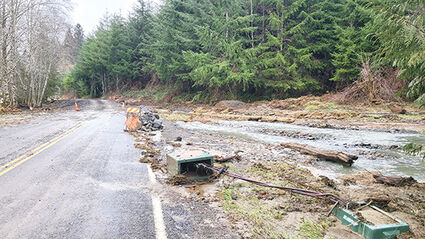 He also commented that people need take steps to protect their property and not rely on the county or other agencies.

"The county can't advise people," he said. "That's a liability. It's your property; do what you have to do."

In other business at Tuesday's commission meeting:

--Besides damage to East Valley Road, the county road crew has a huge slide on Altoona/Pillar Rock Road that has isolated residences near the road's end.

"Please do your jobs for all of us, not just the loudest," he said.