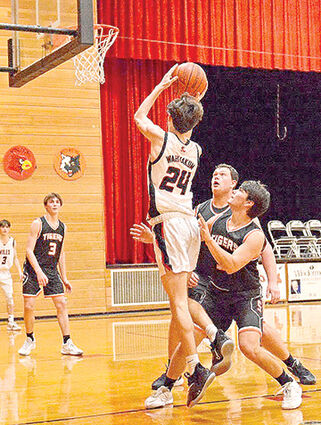 Kyler Sause scored 10 points for the Mules against Napavine.

The Wahkiakum Mules boys basketball team ran into a couple of the toughest teams in the league last week and dropped two more games, bringing their record to 8-6 overall, and 3-3 in league.

They started with a trip to Kalama on Wednesday to take on the number one team in the league and lost 71-51.

"They are a solid team," Coach Todd Souvenir said. "They are very physical; they are very good on the defensive end, and they rebound really well. They definitely came out and took it to us a little bit. We took it on the chin, literally, in a couple scenarios, and we didn't recover from it very well.

"I thought we did some things in the third quarter. The bottom line is they were the better team that night, and they have proved they are the team to beat in the league."

"They are a very physical, good defensive team with Keith Olson, who is 6'6" and a Division 1 football player headed to Utah," Coach Souvenir said. "Definitely a challenge. We were a little lean in the middle and it put a lot of pressure on Kyler [Sause]. He did a really great job in that game. 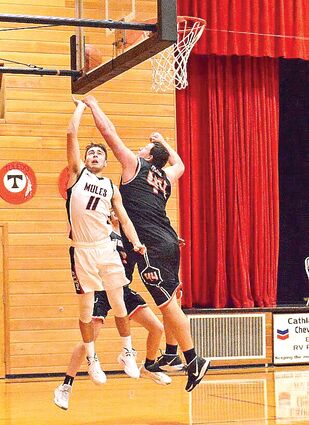 Brody Avalon gets a shot off against 6-6 Napavine center Keith Olson.

"I was proud of the team as a whole for how physical they were, and how we played with so much passion and energy. It was a fun game. Even though it was a loss, it was a positive game going into districts. To go into halftime down three against that team was a positive."

Keith Olson and two of his teammates combined for 60 of the Tigers' points.

The Mules are on hiatus this week because of covid-19 but are tentatively expected to resume play next week. Check wahkihimules.com for updates to their schedule.