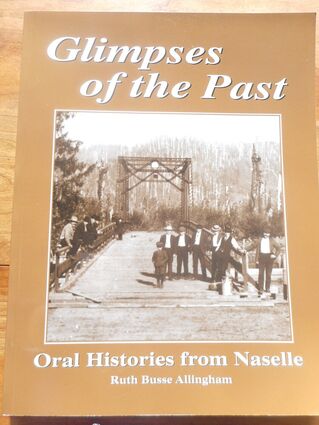 "Glimpses of the Past" is one of a series written by Ruth Busse Allingham with interviews of local elders.

Apology: I need to correct a misunderstanding on my part about the Alpha Theta hanging baskets project. The baskets will be delivered at the high school the week of Finn Fest, not before. If you leave yours to hang at Finn Fest, you can pick them up after the festival ends so you will have them for the rest of summer and fall. I mistakenly thought we'd get them earlier. It's a great idea to share them at Finn Fest when they are in their earlier days. Contact Loretta Smalley at (360) 520-2071 to order your baskets.

Thelma Miller's passing: On Monday, I learned that Thelma Jones Miller had died Sunday evening. I called her family, then her husband Bob verified the news. She had many family members visiting for the weekend. Sunday evening they left around six p.m. Later, around 9 p.m., Bob called for an ambulance since she wasn't responding and had a hard time breathing. She died in the ambulance.

In the book, "The Way It Was," Glenrose Hedlund described Thelma as "an industrious homemaker who did considerable volunteer work." Thelma was well respected and loved. Our prayers go out for Bob, and all the family. She was a wonderful friend to many so losing her is a painful loss to the community.

Photo of the week: Ruth Busse Allingham's 1998 book, "Glimpses of the Past, Oral Histories from Naselle," is one of a series of three books Ruth wrote from interviewing older and younger people in the area. Grays River folks are in "Water Under the Bridge (2001)." Salmon Creek and Deep River interviews are in "The Way it Was (2002)." These books are now hard to find. The Appelo Archives Center has some copies left that are for sale.

More on Wilho Saari: I researched more information on Wilho Saari by opening Ruth Busse Allingham's 1998 book, "Glimpses of the Past, Oral Histories from Naselle," and reading his sister May's interview about their family history. First, I learned that as a child, he was called Will or Willie. So said his sister May, who also played the kantele and the piano. This family story is typical of the immigrants from Finland. The story starts in Finland. May tells us, "My father, Wilho, was from Halsua, Finland. His last name was Leppasaari, which means "alder island." When he took his citizenship papers, he dropped the Leppa off and used the name Saari. My mother's folks were John and Alma Lindstrom. They were from Rauma in a suburb known as Vasarainen. My father first came to Aberdeen and then he sent for his family. My grandmother came with my mother, Aili Marie, who was the oldest child, and John, who was the next oldest. Aili Marie was born in 1898. The Lindstroms lived in Aberdeen for a bit where my granddad was logging in the woods. They had four more children, all born in Aberdeen – Toivo, Alma, Annie and Paul. In 1924 My grandparents, the Lindstroms, moved their family to Naselle where they bought a farm of 40 acres on the old Knappton road. My folks got married that year in December. It was a public wedding at the Andrew Wirkkala home. Andrew was my father's uncle. My father worked for Johnson Brothers' logging company and later he was self-employed. He was in logging himself – gyppo logging. He did trucking, too. He also hauled freight.

Many in my family have played the kantele. My dad and his brothers played it. It has been handed down through the family. My great-great grandmother is noted in Finnish history for the concerts she gave. She was a poor peasant woman with many children desperate to get some money to feed them. She had a hard time to keep going with eleven children, so she took off down the road playing the kantele. She'd get a few rubles from people. A man heard her and offered to have her play in Helsinki so she went there. From there she began going on concert tours and that's how she made money for her family. I started playing the kantele at about eight years old. My brother, Willie, didn't play till he was 50. Willie and I have different styles. I play from the short side and he plays from the long side. That's the style in Finland. They teach both at the Academy there.

Willie obtained a grant from the Washington State Arts Commission to teach kantele, and he taught his daughter. He has conducted workshops, and as a result he has a student that also joins our group when we play at various Scandinavian functions.

My brother Leo is married to Mary Simukka, and they have four children. My brother, Wilho is married to Kaisa Kankkunen. She's from Finland. A linguistic major in Finland, she was here for a year improving her English skills. She lived at Ben Wirkkala's for a year while she was learning English. That's when she and my brother started going together. Here's how they tell it now. He wrote to her in April, engaged in May, married in June, separated in July and reunited in November. They were separated because she went back to Finland to make arrangements for a permanent move to this country. She came back in November. They have two children, a son Riki and a daughter, Karen. Riki is a school teacher in PeEll. Karen's husband, Greg Nelson, teaches in the local schools." May Florence Adair, August 24, 1928-January 10, 2019, passed away at home in Naselle, Washington at ninety years old. Services were held at the Naselle Assembly of God Church.

May and Wilho's story is a common one in SW Washington. Their impact on the Naselle community is similar to the Swedish, the Norwegian, the Polish, the British and the Irish who came here for a better life. Their faith, values and love of this country built a place where all of us can have good lives, healthy families and a good education. May their spirits remain here forever.

Senior Lunches: The third Wednesday of the month, February 16, is the Potluck Lunch at the Senior Lunch Club at noon at the Rosburg Hall. If it's your first time, you don't have to bring anything, but cookies and pickles are always welcome! CAP's box lunches are available for pick up every Thursday at noon at Rosburg Hall. Call ahead to Denice to reserve your lunch at (360) 762-3111.

Word for the Week: Family.