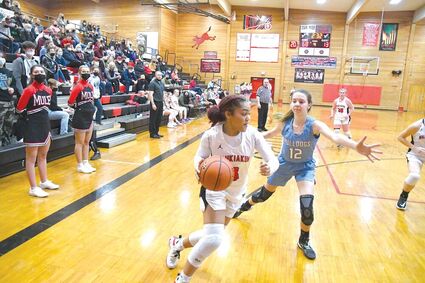 Amirah Abdul-Kariem drives to the hoop in the Mules' win over Stevenson.

The Lady Mules won their final two league games last week and inched closer to a trip to Spokane with wins in the first two rounds of the District 4 tournament this week.

On Tuesday, the Lady Mules took on Napavine in the second round of the district tournament, and they did it without one of their starters, Miya Kerstetter, who sprained an ankle in open gym over the weekend.

The Lady Mules were behind for much of the game but pulled ahead when Amirah Abdul-Kariem hit a three to end the third quarter. They never looked back, beating the Tigers 40-31.

"I knew we could do it the whole game, Coach Rob Garrett said. "It was a super fun game, and I thought we learned a lot as the game went on. We had more and more composure as the game got further along, which was great to see. There were huge performances by many people on our team tonight, but I want to point out just how big of games that Amirah [Abdul-Kariem] and Bailey [McKinley] had tonight."

"They had to play huge minutes and they stepped up big time, really anchoring down the defense. Amirah hit a huge three to end the third and that was a big momentum shift for us. Bailey not only played great defense but her rebounding was absolutely awesome. No chance we win that game without both of them stepping up and crushing their role."

The Lady Mules will take on Chief Leschi next Tuesday in the district semifinals at Kelso High School at 7:30 p.m.

On Thursday, the Lady Mules hosted Stevenson and beat them easily in their final league game of the season 63-12.

On Saturday, in the first round of the District 4 tournament, the Lady Mules hosted Stevenson again. It was a similar outcome to their last meeting with the Lady Mules winning 75-13.