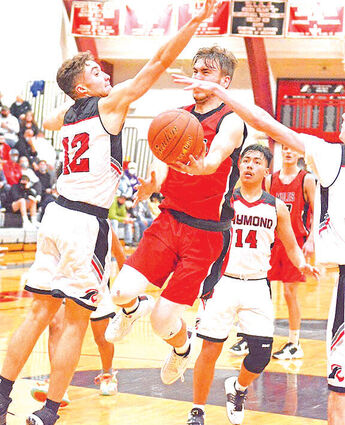 Above: Mule Brodie Avalon tries to split the Raymond defense.

The Wahkiakum Mules boys basketball team lost two games this week, one to finish the regular season and the second in the first round of post season play.

Last Thursday, the team traveled to Morton/White Pass to play their final conference game of the season. The Mules lost 65-41.

"They played a zone defense, and we did not handle it very well," Coach Todd Souvenir said. "We've been working on how to handle that in the last week, moving the ball and reacting to what the defense gives us. They got a lot of deflections and steals, and those live ball turnovers create easy transition buckets for the other team. We've got to figure out how to cut down on those if we're going to go on in the district tournament."

"We did not show up to play on the defensive end or for rebounding, and it set us up for a long night in White Pass," he added.

A coin toss gave the Mules fifth place in the Central 2B league, and on Saturday, they headed to Raymond for the opening round of the District 4 Tournament. They lost to the Seagulls, the Pacific 2B number four team, 73-56, which set the Mules on a longer road to state, with a series of loser out games to navigate.

"It started out okay, but we had a few turnovers that led to a few more turnovers and Raymond got the momentum," Coach Todd Souvenir said. "We dug ourselves a hole and couldn't climb out of it. We've got to regroup and cut down on the turnovers moving forward, and take one game at a time."

"It was tough for the kids," he said. "It was a tough loss against a quality opponent."

The team's goal this year is to make it to a regional game, Coach Souvenir said.

"That goal is still in front of us," he added. "I think we're on the right path for the next game."