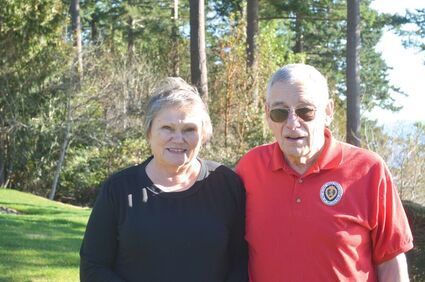 Bob and Esther Roche are the Cathlamet Woman's Club's citizens of the year.

After a lifetime of service, Bob and Esther Roche are being honored by the Cathlamet Woman's Club, having been named Citizens of the Year.

The pair are defined by citizenship. They seem tirelessly willing to step into leadership roles, help members of the community when they see a need, and just simply get some really great things done.

While they may be driven by concern for others, it's also very clear how very happy and fulfilled they are with all the volunteering, the hobbies, the time outside, and the time with friends and family.

The two grew up on two different coasts. Bob was raised in upstate New York. He served in Vietnam as a Captain in the U.S. Army. Esther Lechner grew up in the Elochoman Valley and graduated from Wahkiakum High School, and the pair met while Bob was convalescing from injuries he suffered in Vienam.

Many years later they would return to the area and settle on the land that belonged to Esther's family for three generations.

They've been involved in so many different things since then, it's hard to know where to start.

Esther believed she was going in to cover one shift at the Wahkiakum Food Bank, 22 years ago, but the person who asked her to help that day said he'd see her next week. She is still taking shifts.

"They have great volunteers there, wonderful people," Esther said. She described the work as humbling.

She eventually became secretary for the food bank. Bob began volunteering there too. He joined the board and did many things, including helping to expand storage space. Both of them worked with the Washington Department of Fish and Wildlife to have illegally caught or injured fish and wildlife processed and donated to the food bank. And Esther helps assemble special baskets for Christmas and Thanksgiving holidays.

"I have half my quilters working there now," Esther said.

The River City Strippers to be exact. It's another charitable organization that Esther has been involved with for the past 20 years. The women meet regularly for a bit of tittle-tattle, and a lot of quilting. They look for any reason to make quilts for people in the community, whether they are ill or have had some kind of setback, or they are in the WIC program, a newborn, or a veteran.

Meanwhile, Bob got involved in the local VFW Post.

"When I first got here, there were only about 16 people in the post," Bob said. "We met once a month in the Pioneer Church."

Realizing that the post wasn't recognized in the community, he took to heart a phrase he had used while working for AT&T.

"If you want to get to know somebody, you do something to make them want to know you," Bob said.

First he donated a Black Angus for a raffle, which put a little money in the bank for the VFW. They began to do things in the community, including Bald Eagle Days. Bob was always trying to get everyone involved in programs.

It's no surprise really that they elected him Post Commander.

The local VFW post brought the essay contests into the local schools, started nominating teachers for awards, and organized the fishing derby. They hand out poppies, and participate in a Veteran's Day assembly at the high school.

These days, the VFW membership has multiplied, and they have 62 members.

One of Bob's favorite events, which he started about 10 years ago for Eric Hansen's eighth grade students at John C. Thomas Middle School. They meet at Greenwood Cemetery to place flags on graves, and to talk to about the Memorial Day holiday.

It was obvious the simple act meant a lot to him.

Another thing that has given Bob a lot of pleasure was helping the older veterans in the community learn about programs that were available to them, like free hearing aids through the Veterans Administration. He was also known to step in and help them with other issues as well.

Esther joined an auxiliary in Toutle after realizing there was too much paperwork in setting up one closer to home.

It wasn't long before she found herself as the acting senior vice president, secretary, and legislative chairman for southwest Washington.

Meanwhile, Bob went from post commander to district commander for the VFW, responsible for an area that covers Mossyrock to Raymond, Long Beach and Longivew/Kelso and on to Toutle.

In 2016, Bob was named VFW Veteran of the Year for the state of Washington, Esther said.

Why have the pair done so much?

"When somebody sees something and thinks somebody should do something about that," Esther added, "they should remember they are somebody."

Plus, she said, there is value in getting your hands dirty, getting something done, and getting back out again.

Bob agrees but sees value in encouraging others to get involved as well.

These days the two are trying phase out some of the responsibilities, if they can. It might be hard after a lifetime of service, but there are other things calling the Roches like travel, children, and grandchildren.