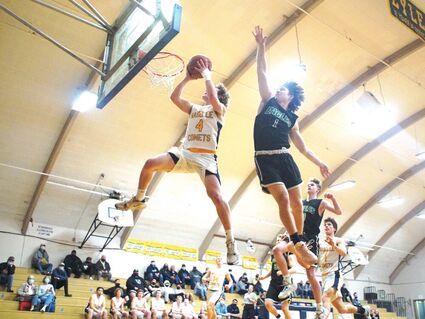 Naselle senior Joe Strange leaps around Firm Foundation's Trevin Long for the attempted reverse lay-up. Naselle's offense dominated Firm Foundation on Tuesday night as the Comets won the 3rd round of the 1B District playoffs by the score of 87-39. Strange finished the game with 8 points and played a pivotal role with his crisp passing and alert defensive play.

A forfeit from the Washington School for the Deaf on Friday automatically advanced the Naselle girls in the district tournament. On Monday, they continued with a win against Mary M. Knight, 62-8.

The girls faced Mossyrock on Wednesday, but the score was not available by press time. A win sends them to the district championship game on Saturday, and guarantees regional play on February 25-26. A loss means the Comets will play for third and fourth place on Saturday, with only one of those teams going on to regionals.

The Comet boys began district play on Tuesday with an 87-39 win against Firm Foundation. They face Oakville in a semifinal game today (Thursday) at Oakville at 6 p.m. The winner of that game will go on to play for first and second and the loser will vie for a final berth to regionals. 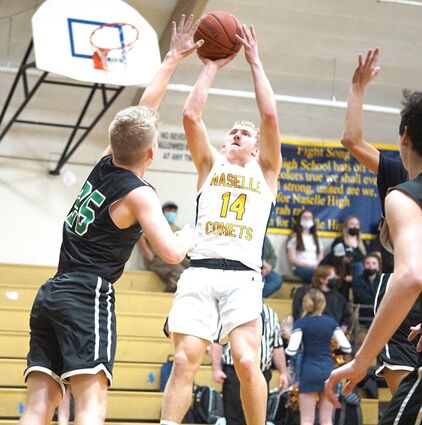 Naselle junior Kolten Lindstrom drains the fade away for two points against Firm Foundation on Tuesday night. Lindstrom scored 34 points for the Comets as Naselle easily won their 3rd round district 1B playoff against Firm Foundation in Naselle. The Comets will face Oakville High School in Oakville on Thursday to see who will play for the district 1B league championship on Saturday in Montesano.