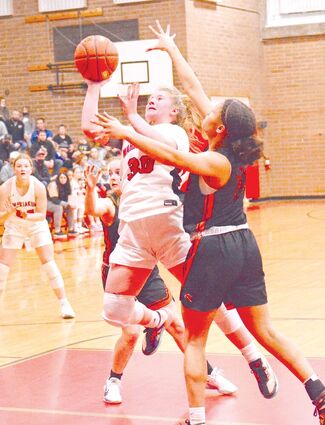 Reigha Niemeyer scored 26 points for the Mules in their win over Rainier.

The Wahkiakum Lady Mules basketball team will face Tonasket in regional completion on Saturday after a fourth place finish in the District 4 2B tournament.

After last week's loss to Chief Leschi and a move to the consolation bracket, the Lady Mules advanced in the district tournament with a 60-38 win against Rainier last Thursday.

"Rainier was a great bounce back game for us," Coach Rob Garrett said. "The girls executed really well and played with a ton of confidence. I thought they had a lot of fun and let the little things go."

On Saturday, the Lady Mules battled Adna for third and fourth place in the district tournament. They lost to the Pirates 43-42.

"Adna was a good back and forth game all the way through," Coach Garrett said. "Emmie [Niemela] had a great game overall. I thought the girls fought hard. It was nice to see them respond with a huge 10-0 run out of timeout to take a late three point lead. 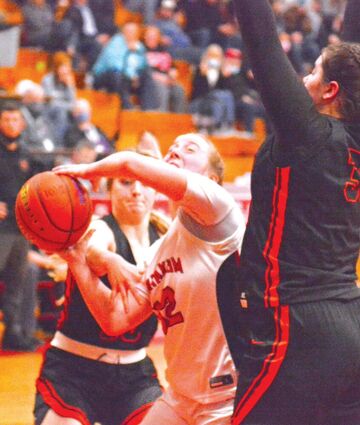 Miya Kerstetter fights through the Rainier defense for a shot.

"Unfortunately from there the wheels fell off, and everything seemed to go Adna's way. There are some great teachable moments in that game, and we will learn from our mistakes so that we are better moving forward in close games down the stretch."

"We are excited about the opportunity to play in regionals," Garrett said. "Tonasket looks fast and they play hard. We will have to play fundamental basketball and minimize our turnovers. If we do, I'm very confident we will move on to Spokane."

The Lady Mules face Tonasket in a loser out game at 2 p.m. on Saturday at Mark Morris High School. The winner will head to the State 2B tournament in Spokane on March 2.