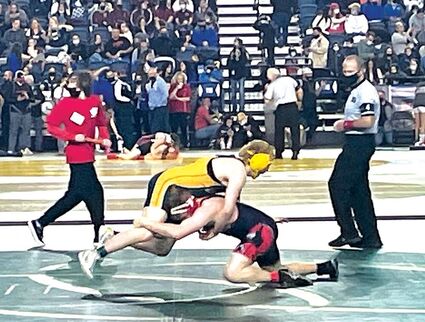 Senior Gabe Moon goes in for the double-leg shot against his opponent from Darrington. Moon and team mate Cayden Mendez each finished tied for fifth place in their weight classes. Courtesy photo.

After a roller coaster of a season that saw multiple different shut downs due to Covid and weather, the Wahkiakum Mules wrestling team endured finishing strong at the Mat Classic XXXIII State Wrestling Tournament this past weekend at the Tacoma Dome.

Participating in the tournament were Seniors Cayden Mendez and Gabe Moon. Senior Jerimyah Johnson, junior McKenna Mendez, and freshman Zaya Ray we're also invited to the tournament as alternates. Because there were no scratches in their respective weight classes, they did not participate.

"If I were to sum up the season in one word it would be: Adversity." Like everyone else we battled through Covid, weather, and injuries. However, I'm fairly certain we were the only team in the state that had a head coach with no wrestling experience," commented head coach Garrett Radcliffe. "For that, I'm incredibly thankful for our student athletes. They've certainly made me fall in love with this sport."

After first round losses at the state tournament, both Mendez and Moon rallied in their second matches securing victories and moving on to Day 2 of the tournament.

In Moon's next match he took a 0-0 score into the 3rd and final round. As that round concluded and the whistle blew, Moon found himself on the losing end of a 3-1 score. Moon would finished tied for fifth in the state at the Classic 2B 195 lbs. class.

Mendez would soon follow and he, too, found himself in a 0-0 deadlock of a match through two rounds. In the second round, a slight misstep would find Mendez's opponent on top and securing a win by pin. Mendez would finish tied for fifth in the state at the Classic 2B 285 lbs. class.