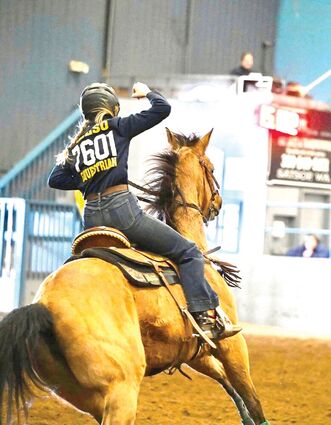 Makayla Davis, who rides Teanna while competing for Kelso WAHSET, gives a fist pump after she sees her time in the barrel run at a district meet this weekend. Courtesy photo.

Makayla Davis, who participates in WAHSET, the Washington High School Equestrian Team, is state bound in two events and has the potential to qualify for a third.

Competitors must finish in the top three in the same event at two district meets during the season or break a record to qualify for state.

Davis, who had already placed in the barrel and pole bending events at a prior meet, was disqualified in the figure eight last time around and has one more chance at it at a final district meet in April.

State competition takes place in Moses Lake in May.

Makayla is a sophomore at Wahkiakum High School and is the daughter of Crystal and Dave Davis.