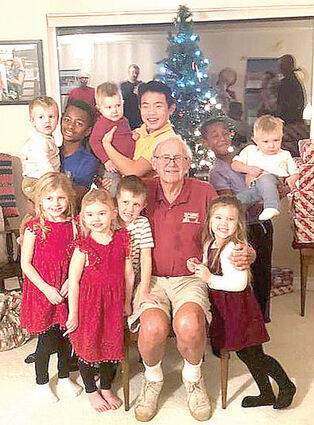 Ted Swanson surrounded by all his favorite kids at Christmas. Photo courtesy of Swanson family.

Photo of the Week: Theodore Willard Swanson May 30, 1929 - March 21, 2022. He was the youngest of eight children and the only boy. As a child he was called Teddy. His sister Lillian Swanson Whitten (born 1909), the oldest child in the family, said in an interview in the book, "Water Over the Bridge" by Ruth Busse Allingham that "their family was always musical and they loved to sing and dance. Dances down in Rosburg were at the Grange Hall there -Rosburg Hall. The Grange disbanded and some of the people joined the Grays River Grange. The Rosburg Hall was taken down and another one built, and they had dances in that for a long time. Then it burned, so they built the one they have now (1957). Dad would play the violin. Mother played the piano. Our life in Rosburg was a good one. There were lots of kids around. Workers with their families lived there in those houses near the mill. We went swimming right off the dock where we lived, and the kids living nearby came to swim. Things are different now. People don't get together like they used to. They used to visit. Now we have television and cars. They finally got a road down there to the mill. (Mill Road off Altoona, not far from the Burkhalter Farm). Dad got a car – a Dodge – in the 1930's." Ted's life spanned many years in this area. He and Sally left a wonderful legacy in all the children he loved and influenced.

In this week's photo, you see Ted Swanson with all his little ones around him at Christmas. Granddaughter, Hannah Swanson, said: "Yesterday we lost an amazing man, my grandpa Bachi. To know him was to love him and I'm truly grateful that I got him as my grandpa. I'm thankful for the countless memories I have with him and am truly blessed he got the chance to come visit me in Arizona, the place I call home. My favorite thing to hear from him was when he would tell my brother and I how proud he was of us. I hope we can continue to make you proud, Bachi. Losing anyone is hard, but this one hits differently since he was my last grandparent to go. I think what's helping me through this is knowing he's back with my Nana whom he has missed so much these last two years. I hope you're enjoying your martini up there because I'm pretty sure it's always five o'clock in heaven."

Funeral planned for Ted and Sally Swanson: A funeral service for both Ted and Sally Swanson (due to covid she did not have a funeral) will be held on April 9 at noon at Valley Bible Church. Rest in peace, Ted, and join Sally in the family cemetery. She's there, pretty as ever.

Free Computer classes at Naselle Library: A request came from Lydia, one of four teens who are on a mission to help adults in Wahkiakum County develop better digital skills. "We have been teaching classes in both Cathlamet and Naselle. We are having difficulty getting the word out especially to those on the west end of the county. I am contacting you now to request that you mention us in your Downriver Dispatches article. It would be greatly appreciated! If you can think of anyone who might be interested, please tell them about us too. Our future meetings in Naselle are: March 31, 5:00-6:30 p.m., Naselle Timberland Regional Library- Internet Behavior; April 7, 5:00-6:30 p.m., Naselle Timberland Regional Library- Searching for digital information; April 14, 5:00-6:30 p.m., Naselle Timberland Regional Library- Video Conferencing. At each meeting, we teach a lesson, hold a Q & A period, and help the adult students with their computers. We suggest that participants bring their preferred digital device. If you know anyone who is looking for more information, or would like to be added to our email updates, feel free to respond to us at this email address: wahkiakum.techchangemakers@gmail.com or Call the WSU Wahkiakum County Extension office at: 360-795-3278." Lydia from 4-H Tech Changemakers

Spring and beyond calendar: Above you'll see the dates for those computer classes through April 14. Here are more dates to add:

April 9: Funeral for Ted and Sally Swanson at noon at Valley Bible.

May 14: Sponsored by the Wahkiakum 4-H, the annual White Tail Run is scheduled for May 14 at 10 a.m. at the Julia Butler Hansen Refuge. For fees and registration, I found it at: https://gamefinder.com › activity › great-white-tail-run / or facebook page using hashtag #GETR2022.

And to end, here is a poem for Ted's family. It was written by Irene Martin from her book, "Beach of Heaven." She says: "Death was an integral daily reality of logging. As one old-timer noted: We never figured we'd live to see fifty. One company I worked for busted up or killed a man a week." The title is "Dad."

A week after your Dad died you missed him so

That I sent you over to the homestead that Great Grandpa cleared in case he might be there. But Dad wasn't there, and you came home an hour later, disappointed.

So I thought maybe if you went to Great Grandma's grave, the one who died in childbirth, Dad might be there. But Dad wasn't there either.

It had snowed way up in the hills so I suggested we take a drive up to the south fork of the Grays River where the snow line is. We got in the pickup and drove to the cleft where you can look down over the whole valley. It's near where Dad used to run pack trains as a young man.

I stayed in the truck while you took a walk.

The Snow line was higher than I'd thought. I could see it across the valley. The wind blew in strange gusts up from the valley floor, tearing twists of fog into shreds. You came back an hour later and said, "Dad was there." Word for the Week: memories.