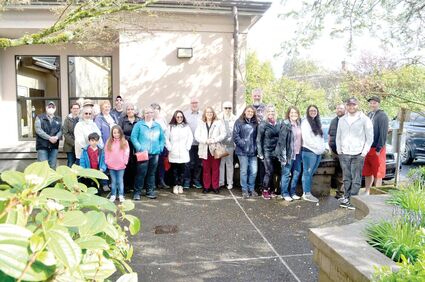 A crowd showed up to the Wahkiakum County Courthouse on Monday to show support for the Wahkiakum School District, in a first trial hearing of the lawsuit against the State of Washington to amply fund facilities.

Wahkiakum School District's lawsuit against the State of Washington was heard for the first time on Monday, in Cathlamet before Wahkiakum Superior Court Judge Donald Richter, following a motion to dismiss the case.

The district claims that the state is failing to meet the standard set by Article 9 Section 1 of Washington State's constitution, which says "It is the paramount duty of the state to make ample provision for the education of all children residing within its borders, without distinction or preference on account of race, color, caste, or sex," when it does not amply fund capital costs that would allow the district to upgrade aging facilities in order to keep students safe and ensure they can compete with their peers in a changing, modern world.

Lauryn Fraas from the Washington Attorney General's office who was representing the state, said that the state provides hundreds of millions of dollars to local school districts for school construction and modernization projects as well as for special capital grants and emergency funds, including more than $730 million in its most recent budget to the state construction assistance program, as well as another $100 million in additional capital funds.

"The state is clearly committed to assisting local school district with building and modernizing its schools," Fraas said.

"We can all agree that school construction projects play a vitally important role and the state acknowledges that it has a role in funding those projects," she continued. "The issue before the court today is not whether school facilities are important, it's not even whether the state has an obligation to assist in funding school construction costs, instead the only issue the court needs to decide today is whether school capital costs fall within Article 9 Section 1 of the Constitution such that the state is required to fully fund those costs."

Citing a 2017 McCleary order, she claimed that the state Supreme Court had already determined that capital costs did not fall within Article 9 Section 1, and urged the local court to follow that decision here.

She believed that the plaintiff's claims were not viable because neither the state Supreme Court nor the legislature had included capital costs in their definition of basic education; and because the text and the history of the constitution and its amendments demonstrated that school capital costs are not solely a state's obligation under the constitution.

Fraas said that in the 2012 McCleary Decision, the state Supreme Court did a "deep dive" into the state's responsibilities under Article 9 Section 1, and that opinion focused on the term 'education,' as it would determine the scope of the state's duty. She said the state Supreme Court assigned the judiciary to interpret the word education by providing guidelines and the legislature "to develop programs it deems necessary to provide that education."

"The supreme court did not require it to do so," she added. To illustrate, she spoke about the affect of all day kindergarten and the K-3 class size reductions, both defined as part of basic education. They required more classrooms, so the legislature provided funds to the School Construction Assistance Program (SCAP), a program that requires contributions from school districts in order to qualify for funds.

In this case, she pointed out, the supreme court did not require the state to solely fund the capital costs.

Fraas talked about the history of levies and bonds, as well as SCAP, as more evidence that school construction was not solely a state responsibility under the constitution.

"Do you believe there is never any level of capital cost or need that triggers any duty under Article 9 Section 1? Judge Richter asked her.

Richter asked if there was any judicial oversight on programs like SCAP were run, or how funds were allocated to specific districts.

"I'm not sure," Fraas replied. "This would be a different lawsuit if the lawsuit had been focused as a challenge to the SCAP program and how it is administered. The only issue before the court today is whether capital costs are an obligation of the state under Article 9 Section 1."

"That is an entirely different situation than with basic education responsibilities under Article 9 Section 1, where the state has full responsibility for it," Fraas said. "The only question before the court today is just a narrow question of law: Is full state funding of capital costs required by Article 9 Section 1? The Supreme Court answered this question less than five years ago in its 2017 order in the McCleary Case. This court should follow the state Supreme Court rulings on this issue and dismiss plaintiff's complaint, prejudiced."

Tom Ahearne from the law office of Foster and Garvey, and the lead litigator in the McCleary case, responded on behalf of the Wahkiakum School District.

"The school district's case lives or dies on the judicial branch's answer to the question, does Article 9 Section 1 exclude or not exclude capital facilities?" Ahearne said.

He said that the attorney general was "hanging their hat" on an unpublished 2017 order from the state Supreme Court.

"I know people have varying opinions on the state Supreme Court, but I don't think anyone would say they were too stupid to know the difference between a published decision and an unpublished order," Ahearne said.

In respect to the 2017 order, Ahearne said that it pointed out areas that the prototypical school model had left unfunded or underfunded.

He responded to some of the defendant's statements regarding kindergarten classrooms and the following about reduced class sizes in K-3, quoting directly from the brief.

"With respect to reduced class sizes in K-3, the entire briefing was one sentence, a list of things, and 'For example, the state never claims to fund what districts must pay to build additional elementary school classrooms,'" he said.

Ahearne added that McCleary did not address capital costs at all one way or the other and that that was consistent with the state's insistence in its August 2016 brief that "Capital costs are not addressed in the McCleary courts 2012 decision, nor has the...constitutional relationship between state and local decision making on school facilities been adjudicated in any other case."

"That's true, this is the first case," Ahearne said.

The same unpublished order the state is relying on, on page 37, states that "at this point, the court is willing to allow the state's program to operate and let experience be the judge of whether it proves adequate."

Ahearne addressed the state's motion to dismiss, and said that the state was acknowledging that the facts in the school district's complaint were true.

This included: "Wahkiakum School District does not have the physical facilities and infrastructure needed to equip all its students with the education required in today's economy, to compete in a level playing field with students privileged to live in our state's more affluent areas; and, the Wahkiakum School district does not have the facilities needed to safely provide all its students a realistic and effective opportunity to obtain the knowledge and skills encompassed within the word 'education' in Article 9 Section 1."

"Wahkiakum School District elementary school was built before I was born," Ahearne said. "The high school was built the year I was born. The middle school, they all lack the facilities, they all need a total of $50 million of funding to provide students the education that they have a right to under Article 9 Section 1."

"Our position is the same with respect to operating costs as it is with facilities cost," Ahearne said. "The state is solely responsible for the basic education costs, the operating costs provide kids that education. School districts, local voters, can pass levies to enhance that. That's what levies are for, enhancing above Article 9, Section 1. Facilities are the exact same under the wording of Art 9 section 1."

"Our position is you can't leave folks in poorer areas of our state high and dry," Ahearne continued. "Those kids, they deserve the same facilities to provide them a realistic and effective opportunity to meet state learning standards, and the facts upon which the state bases their motion is Wahkiakum does not have those facilities."

"To a lot of folks in Olympia, the backwater places really don't matter, they don't have hardly any voters, but under our constitution, every child is entitled to that same education, and right now under the facts, the state admits for the purposes of their motion to dismiss, Wahkiakum kids don't have that," he said. "All we are asking for is for the judicial branch to enforce the wording of Article 9 Section 1."

"What the state's argument really does is they want you to insert into Article 9 Section 1, instead of saying 'without distinction or preference on account of caste,' they want to say 'without facilities.' 'It's the paramount duty of the state to make ample provision for the education of all children residing within Wahkiakum without facilities.'" Ahearne said. "We respectfully submit that that is not what the wording of our constitution says."

The defendant was allowed three minutes to respond.

Judge Richter thanked everyone for their work and said he would be reviewing the matter.

"The court will endeavor to get its decision out timely; it's an important issue, I guess not only for our community, but for communities across the state. I will take my time with it," he said.