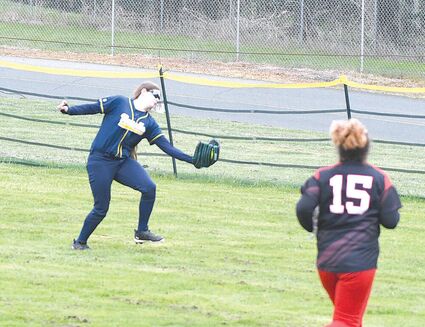 With the Lady Mules lacking nine players, Lady Comet Avalon Sullivan stepped in to help the Mules and made a hard catch on a Naselle fly ball.

They traveled north to play Morton/White Pass on Thursday and lost 18-3.

"It was our first real game of the year," Coach Garrett Miller said.

Reigha Niemeyer hit a triple and scored one run for the Lady Mules. She also struck out two batters from the mound. Alaya Cripe stepped in to relieve Niemeyer and struck out four Timberwolves in the final two innings.

On Friday, the team hosted Naselle and lost to the Comets 21-8. 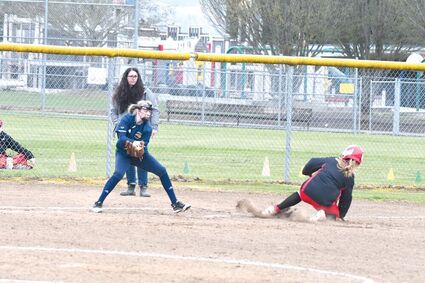 A Lady Mule slides into third base, hoping to avoid the Comet tag.

"We were going to play the KM match-up with only eight players because we had a girl go home from school sick, but thankfully Naselle was gracious enough to loan us a player, (or a different player every inning) to play centerfield and bat ninth," Coach Miller said. "The Comets even made a couple great plays for us, as a girl named Avalon [Sullivan] came up with an amazing catch that saved two runs in the outfield and another girl named Courtney [Paul] was able to knock in a run for us at the plate."

For the Mules, Niemeyer went 3-4 at the plate. She hit a double and scored two runs. Evelyn Hogue went 1-4 and had an RBI and two runs scored. Bailey McKinley was 1-4 with an RBI and one run scored.