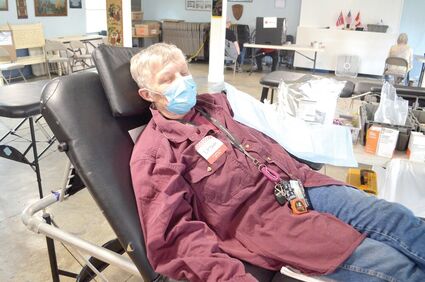 Ursula Petralia gives blood at a Red Cross blood drive at the Norse Hall on Friday.

"Everyone should open veins as often as possible," Cathlamet Mayor David Olson said. "This is Red Cross. This is basic. It's a civic duty and an honor to do it. It's a very easy way to help people."

Suzanne Holmes has been supporting the American Red Cross since she was 16 and a candy striper and even raised money for them in later years.

"It's a solid organization, with great people and volunteers," she said.

Ursula Petralia had just gotten comfortable and was waiting for a volunteer to begin drawing blood.

"This is really painless," she said. "Even though I have a blood phobia, I do it anyway. One day I may need it myself."

The next blood drive is June 27, according to Betsy Robertson, the Regional Communications Director from the Northwest Region of the American Red Cross.

"A donor is eligible to give blood every 56 days," she added, " so our teams tend to schedule the same location in three month intervals, to try and build consistency with the local donor base."

"The American Red Cross is reminding blood donors it's critically important to maintain a stable blood supply this spring to support those with chronic illnesses and other blood needs in the U.S.," she wrote. "Blood transfusions remain one of the most critical treatments for patients like those living with sickle cell disease – the majority of whom are of African and Latin descent – and beta thalassemia major, which disproportionately affects those of Asian descent. Additionally, women who are Black are more likely than women who are white to experience severe postpartum hemorrhage, often requiring blood transfusion."

A screening is provided when donors check in, and can aid in early detection or prevention of a myriad number of issues.

For more information or to make an appointment for the next blood drive, call 1-800-RED-CROSS.