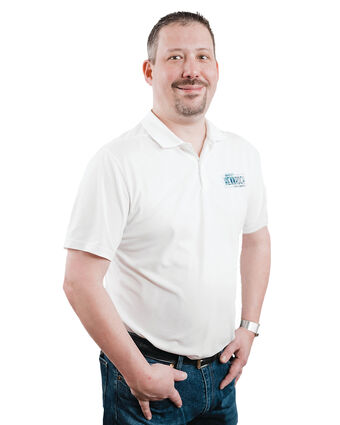 An informal conversation with Brent Hennrich, a Democratic candidate running for the position of U.S. Representative for District 3, was held on Saturday at Maria's Place in Cathlamet.

Hennrich said his concerns included the climate crisis, which they spent much of the hour talking about, and making sure people were provided "equitable whole person health care," expanding access to education, and making sure that "overall we are doing more good for more people more often, every day in Congress."

While trying to answer an attendee's question on how he defined "rural," Hennrich shared his view of service.

"It all goes back to talking to the constituents, and learning what their issues are, and knowing that the constituents in an individual area are always going to know the problem and the likely solution better than any representative anyway," Hennrich said. "It's a matter of working with those people to bring those specific issues forward or find where they can merge together and get a stronger coalition behind it."

One person spoke about a promise made by the federal government to put in fish hatcheries to make up for the loss of salmon spawning grounds when dams were erected.

"...it looks like the federal government has forgotten that promise" the attendee said, "...and are cutting back on number of hatcheries...They are not doing the mitigation they said they would do. Therefore commercial fishing is almost non-existent on the Columbia River. What are you going to do about it when you get to Congress?"

"We need to make sure the federal government is stepping up to bolster the fishing industry," Hennrich responded. "I like salmon...I want to make sure it continues to be an industry and available, but while we are in a climate crisis, I don't think that saying, 'Oh, we need to remove the Bonneville Dam, and everything else,' which is a major source of energy, which is not necessarily creating the carbon footprint that a replacement source could make.

"We need energy, so we need to produce energy. We need more clean energy, so we need more wind and solar, but at the same time we need to make sure these other industries aren't destroyed by our endless need for energy...I'm for an electrified future, as far as getting onto electric vehicles and everything else, but that is going to increase the demands for energy. We have to make those energy investments...and part of that has to be that while we are making those investments we are going to make up for the things that are adversely affected at the same time. So more hatcheries or listening to science about better ways of hatching the fish."

The questions turned to energy issues, and Hennrich was asked about the problems that might arise with dam removal, about nuclear and solar power, as well as wind energy.

Hennrich said he had heard there was some concern from people living east of the Cascades that their land might be covered in solar farms or wind farms to provide energy for people living west of the mountains, mostly along the I-5 corridor. He said there was a similar sentiment in Pacific County regarding offshore wind.

"'You guys on the I-5 corridor need all this power and to get it, you are willing to decimate our way of living and then we all have to move into the I-5 corridor,' he imagined someone saying. "We need to not have circular firing squads. We need to all understand, it took generations, and created this crisis by overconsumption. We are going to have to make some hard choices on what we see out the window. People don't want to see windmills."

"I personally believe a windmill over there may be an eyesore..." he added, "but it's probably better than it being on fire, which is what we keep risking, as we keep getting warmer and warmer."

Hennrich talked about the potential for solar canopies covering large parking lots to generate energy and protect vehicles from the elements.

He admitted to not knowing much about nuclear power, adding, "I know that just saying nuclear power just scares people. It is something I very much would like to learn more about and its potential to help solve the energy crisis."

"We have a climate crisis across the globe," he said later. "Cities are doing everything they can to enact new rules, to mitigate...if we aren't doing that on a national level, being a global leader, for showing that we were terrible about burning fossil fuels in the past...then how can we expect to put any pressure on other countries to do the same?

"If we don't collectively, globally address this, then we are going to go where no one wants to...it's going to be runaway heating. It's going to be massive swings. It must be prioritized. At the end of the day I want you to be able to see your doctor, I want you to be educated, but if we don't have a planet to live on, those other things don't matter so much. There are serious long term problems that need to be addressed, and need people to admit that they are problems and admit that they don't have the answers and that they want to talk to people to get the answers."

To watch a video of the conversation, go to https://youtu.be/f4GOcfETj7M.