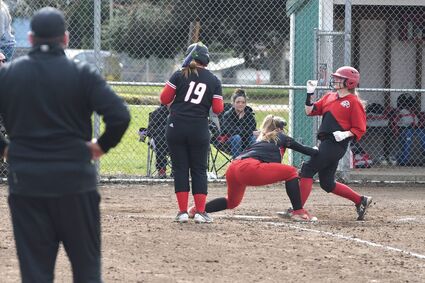 A young Wahkiakum Mules softball team may not be getting wins yet, but that doesn't keep the blessings from coming.

When they didn't have enough players to field a game against Naselle recently, one Comet player after another took a position for them so the game could go on, giving the Lady Mules a chance to enjoy some play time and practice their skills.

Last Friday, the Lady Mules suffered a 19-0 loss to Adna, the league powerhouse, according to Coach Garrett Miller.

"We got some experience seeing what one of the top 2B teams in the state looks like in action," he said. "[Their coach] was super courteous about it too. He could've run up the score quite a bit more. He held runners back when they could have had triples. He held them at second." 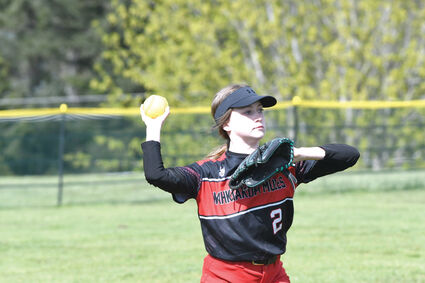 Infielder Jessie LaFever makes a play for the Lady Mules.

"We ended after three innings due to the mercy rule, but they stayed for a while after the game and let another one of their pitchers throw to our whole lineup in what you could almost call a joint practice for an inning or so," Coach Miller said. "We worked on hitting and base running while they got her some mound time and some of their substitutes some defensive work. It's a real classy program."

"The ump left and we just kept playing," Coach Miller added. "We just had their awesome catcher call the balls and strikes."

Wahkiakum played Toledo on Tuesday. There was no score reported for the first game, but the Lady Mules lost the second game 24-2.

They host Rainier today (Thursday) and travel to Napavine next Monday.