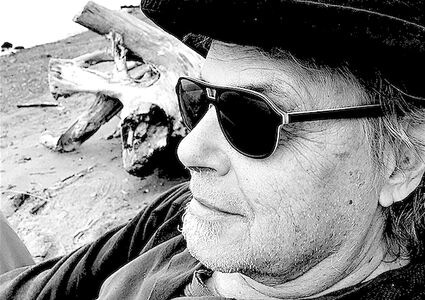 Antero Alli is an author, experimental theatre director, and filmmaker. He was recently in Cathlamet to film a scene from his latest creation, Tracer, which will be shown in September. Courtesy photo.

Portland director Antero Alli was in town two weeks ago to film a scene from his new movie, Tracer, in the Carpe Diem, a sailboat owned by Cathlamet Yacht Club Commodore Bud Radke.

I had an opportunity to catch up with the director and his lead actor, Rick Wilding, before they left Cathlamet on Easter Sunday.

Alli has been involved in the theatre for 50 years and started making movies in 1993. He told me that after writing 15 drafts for his new film, Tracer, and guiding the actors and filming, the real work was about to begin.

"The story actually takes place in the editing," Alli said. "As far as I know, this is what the story is about: It's about this elder sailor. His name is Leo. He has a questionable past that starts to catch up with him in very unusual ways."

In Tracer, Leo is visited by a son who longs to reunite with his estranged family, an ex-wife who is learning her visions are real, a Russian mafia certain that Leo has something they want, and a recurring dream about things that are better buried.

"It's intrigue after intrigue," Alli said.

The movie will premiere in Portland at the Clinton Street Theatre on September 20, at 7:30 p.m., Alli said.

After that, he plans to release Tracer on YouTube, where all the movies he's made in the last 25 years are available to view for free.

"I've just given them all away," he said.

How did Alli get into filmmaking?

"The impulse and the need came from the unfathomable loss of my second child," he said. "She died suddenly, went into a coma at two years old. The experience hit me on a number of levels. Grief was certainly central, but some rather surprising things occurred to me in the wake of the loss. I started seeing through lies of society.

"In particular, it started with seeing through all the social masks or conditioning around the processes of death and dying. People live as if they are living forever. They don't understand that life is precious and it can go at any moment. I was overwhelmed, flooded with more perceptions of reality than I knew what to do with."

As a writer and director of experimental theatre, Alli thought about turning this experience into another piece.

"That's how I would process my little personal traumas in the past," Alli said. "But this was no longer just personal. There is something much larger here with the loss of a child. I needed a more complex multi-layered medium to somehow match the complexities of my experience. So I bought a camcorder and started shooting whatever, making little short pieces here and there and I got better at it because I kept doing it over and over again. I got kind of a call from my deceased child, at that time, saying, 'Hey do you want to make a movie?' It wasn't exactly like that, but she was there to guide me on a story."

He's been making films ever since.

"I choose film directions and projects based on very different demands for each one," Alli said. "I want to keep growing and developing. Each time it's really quite different. I love actors. I love working intimately with individuals, getting to the bottom of who the character is, what's going on in the room with these people right now.

"It's the subtext, what's going on underneath that I like to discover. I want to film the subtext. If the lines work, great, and if they don't, we just drop the line, because so much can sometimes be communicated without words. I always look for places where I can drop lines. None of my writing is precious to me."

"I know excitement in the state of uncertainty," Alli added. "I equate a state of uncertainty with a creative state. I can only create as long as I remain in some place of almost cluelessness. I don't know what's going to happen next, so let's stay open to what's happening. If I get too sure or too confident, I feel like I'm missing out on many possibilities. So I understand about experiences that are beyond my comprehension, I have affection for them."

He doesn't care for movies that are based on a formula, and has no ambitions in Hollywood, or in main stream films.

"It's self expression, but also self discovery, and more than anything, the chance at communication, which is not the same as self expression," Alli said. "I can express myself until the cows come home, but it does not necessarily mean I'm communicating. I'm just making noise."

That's why he invites people to question and answer sessions after each of his premieres.

"That's when I can begin perceiving what I have actually communicated," Alli said. "I love expressing myself, but I can't stop there. Communication is far more gratifying to me."

Alli met Wilding when he needed extras for his last film.

"We started interacting and there was something about him," Alli said. "I thought, I want to work with him. I don't know how yet, but there is just something about him that speaks to me. There's a story there, and I want to be part of sharing that story. Actors inspire much of the scripting. The role of Leo? I wrote it for him."

Wilding builds tiny houses for a living, and Tracer was his first foray into acting.

"Back in 1985, I read one of Antero's books called Angel Tech: A Modern Shaman's Guide to Reality Selection, so after decades of reading and following him, this happens," Wilding said. "This was blowing my mind. Here we are today, working on a film. It's wonderful, enlightening, and crazy good fun."