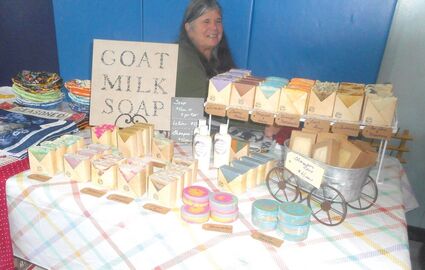 Diane Dyer with her display of goat milk soap at the Super Sale at Johnson Park.

Stories bring us together: I talked with Gail Wirkkala this morning. She called from Longview to give me information on the Rosie Nelson Johnson story that was in the April 21 issue. Rosie talked about the Shamrock Hotel in Deep River. Gail told me that the original story came from Marlene Wirkkala Wiitala. Gail worked in the Shamrock Hotel as a young girl, so she has her own stories and some of the things left from the hotel, too. She invited me to come and talk with her at her home in Longview. I'm so pleased to get to see her and her hotel treasures. Here is yet another incident that shows it's a good thing to subscribe to The Eagle.

Corrections: In the April 14 issue of The Eagle, I made two mistakes with two dates. Darrell Sorenson sent word that I had stated the Ahlberg family came to Grays River in 1885 when it was actually 1875. The Ahlberg sign at the east intersection of Loop and Covered Bridge Roads clearly says 1875 so I should remember the date better since I drive by it often. Also, I reported the Swanson family came to Grays River in 1885 but they came in 1889. I am very sorry Darrell, and all the Swansons, to have mixed up the dates. I will try to be more careful.

Betsy May Fitts: Last week, Betsy May, the sweetest little horse ever, went over the rainbow bridge to the animal cemetery at Joel and Noreen Fitts' farm in Grays River. She was 34 years old. Trained to pull a two person sulky buggy, we often saw her pulling Joel and Noreen for a ride around the valley. She had a pretty trot so was lovely to watch. Happy as any horse could be, she had other horses in the barn and pasture with her, so she was never lonely. She taught all the Fitts' grandchildren to ride and was kind to both children and visitors. I know this is a sad time for Noreen and Joel and all their family. She was a wonderful friend for 28 years and she was lucky to be part of their family.

Photo of the Week: At the Super Sale at Johnson Park last Saturday, Diane Dyer had a vendor table with goat milk soap that was very attractive, partly because the bars of soap were so nicely colored and had lovely scents. Her soap can be seen at the 79 Main Boutique store between the Spar Restaurant and Eagle newspaper office. I bought my first ever "salad bowl," a hanging basket of lettuce and other greens for the back porch. I had never seen one and I love the idea. Like others who live alone, we don't need a long row of lettuce. I am so glad to have it. Great idea! The sale was well attended with many goodies offered in a big bake sale. Just by walking the hallways, it was a pleasure to see all the upgrades that have been made. Kudos to Denise Blanchard and other members of the Advisory Board at Johnson Park.

Angus L. Bowmer: While talking with Bonnie Linquist recently, she mentioned she and Diane Matthews had just returned from the Shakespeare Festival's pre-season opening plays in Ashland, Oregon. That reminded me of Angus Bowmer, founder of the well-known festival with currently 400,000 in annual attendance. Mr. Bowmer and his wife were both teachers in our area prior to 1935. Prior to their years in Oregon, they taught at the Seal River School and if I remember correctly from one of Carlton Appelo's phone books, Grays River also. Angus Bowmer had the students do a play at Christmas, performed on the stage on the second story of the Meserve Store in Grays River. His own autobiography tells their stories of teaching here. I have ordered a copy of his book, "I Remember, Adam," so in some future Eagle I will give you more information. Once I've read it, I will donate it to the Appelo Archives Library so it can be checked out. We are so blessed that Carlton took so much time to carefully research all the history he wrote in those early phone books. He usually filled the "extra" pages in the books with local history and photos. Angus founded the Shakespeare Festival in Oregon in 1935. Born in 1904, his early teaching years were in our own neighborhood. Sadly, the Oregon history web site failed to mention he taught in SW Washington. It only says he graduated from Western Washington University, then taught in the Puget Sound area. That's sad because he and his wife taught in one - or maybe two room - schools when he was teaching here before they went on to Oregon. The Seal River School students sometimes had to row the "school boat" if a parent wasn't available. It was not a short trip. Those kids really wanted an education!

News on the Wahkiakum West's expansion plans: Recently, Diana Zimmerman and I attended a "press conference, along with Nick Nikkila. Diana has her article about all that's happening from Skamokawa on into the Cathlamet areas. Look for her article in this issue.

April 30: The Naselle Lutheran Church will sponsor their annual Spring Festival from 10 to 2. They will offer salads to go, baked goods, quilts and handcrafts, and plants and flowers, all made or grown in Naselle. Proceeds are dedicated to the roof fund and local charities. For questions about the Spring Festival, contact Sherry Hartline at (360) 484-7258 or email: nasellelutheranchurch@gmail.com.

May 7: The Kentucky Derby is aired nationally on NBC from 2:30 to 7:30 p.m. ET on Saturday, May 7. Coverage is also available to stream live on NBCSports.com, the NBC Sports app and Peacock. My favorite sports event! I love the ladies' hats and the magnificent horses. I just talked with my foster sister in Dallas. She and her husband will be attending the Ascot race in England in May. She said women must wear big hats, like the "My Fair Lady" hats in the movie, or they won't be allowed in the gate! So she ordered one and promises photos.

May 8: On Mother's Day, you can take your mother -and all the family – to a Chicken Dinner at Rosburg Hall. It's a fundraiser for the Rosburg Hall Community Club. Proceeds will help maintain the building. The dinners will be available from 11:30 to 1:30.

May 28: Bingo at Johnson Park (not Rosburg Hall)

Word for the Week: Inspiration.