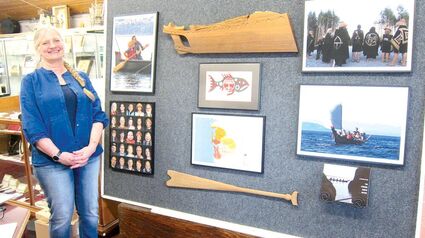 Amiran White's photos of the Chinook tribe will be on display at the Wahkiakum County Historical Society Museum in Cathlamet starting Saturday, April 30 through July 17. Other tribal exhibit are displayed including a wedding dress. Courtesy photos.

The Wahkiakum County Historical Society Museum's newest interpretive exhibit, ntsayka ilii: our place, features the photography of Amiran White together with creatives from the Chinook Indian Nation to explore the resiliency of the Chinook People and their relationship to their ancestral lands as they seek to preserve and restore the legacy of their ancestors and the inheritance of their descendants.

The Chinook Indian Nation is made up of the five western-most Chinookan speaking tribes at the mouth of the Columbia River- the Clatsop and Cathlamet (Kathlamet) of present-day Oregon and the Lower Chinook, Wahkiakum (Waukikum) and Willapa (Weelappa) of what is now Washington State.

Their Nation's constitution was first drafted in 1925 by the Tribal leaders of these Tribes and was later amended in the early 1950s. The constitution outlines Tribal membership criteria and clearly references the five Anson Dart treaties signed at Tansy Point in 1851 by the tribes. It is also one of the oldest living tribal constitutions in the Pacific Northwest. Most current Nation members descend from more than one of the five tribes, and many trace their ancestors from the Wahkiakum people and land.

The Chinook Indian Nation is alive and well. Its members are compelled to preserve their language, tell their stories, sing their songs, and hold the same ceremonies their ancestors have done for the last 10,000 years.

Using photographs, carvings, and informational pieces, this program seeks to educate and raise public awareness of the contemporary issues facing the Chinook Indian Nation and their struggle for recognition, as well as highlight some of the Chinooks' traditional and cultural activities. 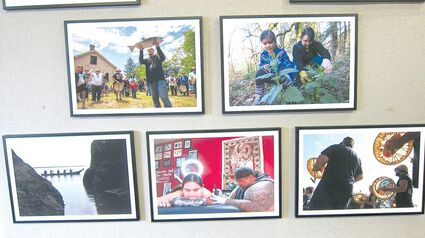 Born and raised in the United Kingdom, Amiran White began her photojournalism career in North America stringing for The Associated Press in Portland. From there she spent 10 years working as a staff photographer on various daily newspapers in Oregon, Pennsylvania and New Mexico before freelancing as an independent photographer. Amiran has won a variety of awards for her documentary work and was nominated for a Pulitzer Prize. Most recently, she has been chosen as one of 10 Oregon visual artists to be awarded the 2022 Individual Artists Fellowships from the Oregon Arts Commission.

The Wahkiakum County Historical Society Museum will be open for viewing of this display and our county history Saturday and Sunday afternoons from 1 to 4 p.m. starting Saturday, April 30 through July 17.