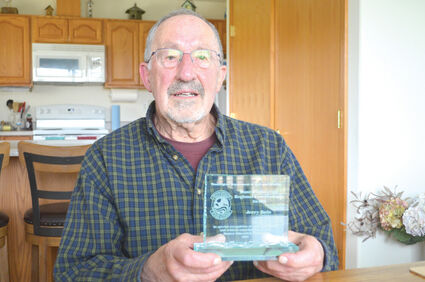 Jerry Bain was recently given a Washington Department of Fish and Wildlife Hunter Education Regional Coordinator Award for his many years of service as an instructor in the program.

Jerry Bain is a modest man. It's likely we would never have heard about his recent honor if a little birdie hadn't come into the Eagle office last week to sing his song.

Bain has lived in the community for more than 60 years and while many may know him for one reason or another, last month he was honored for work that primarily, though not exclusively, connects him with the younger generations in Wahkiakum--hunter education.

In April, the Washington Department of Fish and Wildlife Hunter Education Program presented Bain with a Regional Coordinator's Award for 2021.

"The award was created to recognize individual hunter education instructors or entire teaching teams that filled a critical need for the program," Amy Elliott, the WDFW Hunter Education Coordinator for Region 5 explained. "This would either be holding important classes in areas that aren't well served, helping field coordinators in extraordinary ways, or sometimes just making a huge difference in the way the program is delivered to students."

"Jerry has consistently served as a WDFW volunteer for more than 20 years," she said. "Jerry is someone I can always count on. He is in tune with what is happening in the department. He is very dedicated to providing a great class for the students. He is always great to work with. When we were having to alter some of our procedures during covid-19, he went out and did extra work to find a venue that was outdoors so he could still be teaching classes with the limiting parameters that we had."

Bain has been teaching hunter's education classes for 22 years. Three years ago, he became the chief instructor for the local program.

The class, which teaches safety, sportsmanship, and conservation, is required for anyone born after January 1, 1972 who wants a hunting license.

"We are teaching people to be safe and responsible, but we are also giving them knowledge to be good citizens and stewards of the land," Elliott said. "Hunting funds wildlife management through license purchases. By training the next generations, we are making sure there are wild lands available for hunting, fishing, and other outdoor recreation in the future."

Bain started hunting when he was a kid.

"We lived up Family Camp out here in the Elochoman," he said. "In the summertime, we were packing little .22s out in the woods. I grew up with a firearm in my hand, basically."

The instructors have a lot of important information to go over in the two day course.

"I like teaching, especially the younger kids, the safety part of doing it and the sportsmanship of hunting, and that it can be very enjoyable if it's done right," Bain said. "It's a fun sport."

"One of the big issues that comes up is trespassing," he added. "We teach the students that before hunting season starts, you talk to the landowner to get permission."

Elliott still thinks about what Bain said when she told him the good news. He didn't think he deserved a big award: He was just one little person out here doing something.

The people who say they don't deserve the awards are usually the ones who deserve it more than anyone, she told him.

His reward has always been something else.

It's the 'Hi, Mr. Bain, how are you?' that he hears from the kids or young adults when he wanders into the store, or somewhere else around town. One time he heard it while passing another boat on the Columbia River during fishing season.

"I enjoy teaching the kids," he said.

As Elliott sees it, the course, and instructors like Bain, are building community in small towns, generation by generation. Kids are growing up together, taking his classes, and hunting together. Eventually, if they are lucky, their children will too.

"We love those stories," Elliott said.

Bain still takes time to do a little hunting. He's a little older, and admits he might be a little slower, but the joy of the sport and the camaraderie he shares with the family and friends who have joined him every year keep him coming back.