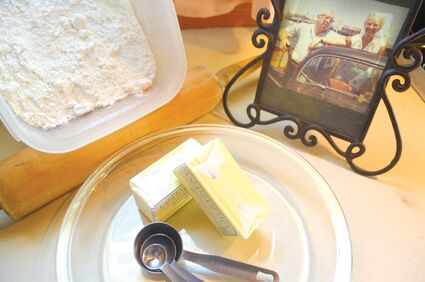 Reporter Diana Zimmerman is learning to make pie this summer and has issued a challenge to any and all Wahkiakum County residents who would like to take her up on it: Who can make a better pie for the 2022 Wahkiakum County Fair in August? For now, she's hoping her maternal grandmother's genes will help her out in the competition.

Part of my family's lore is that a young Ronald Reagan, during his days on the radio, would come in to my maternal grandfather's restaurant in Des Moines, Iowa, where surely he must have enjoyed slices of my Grandma Clarissa's pie with his cuppa Joe.

Like many women of that era, my grandmother was a talented gardener, canner, cook, and baker. She'd made her children's clothes, played the piano, and was well read. She was the first person to suggest I should write.

I had the opportunity to cook for her when she visited Cathlamet. I was probably 15 or 16 at the time, and I remember her eyes on me after taking a few bites, surprised and speculative. Perhaps it was horror, but I wonder sometimes if she tasted potential.

Why am I telling you this?

I have probably made one pie for every decade of my life, but I've often thought it was an art I would like to practice and someday master.

I've decided to issue a challenge:

I propose to spend the next few months learning to make pie with the intention of entering one in the 2022 Wahkiakum County Fair.

Can you make a better pie than me? I invite you to prove it by entering your own in the fair this year. The Wahkiakum County Fair starts August 18.