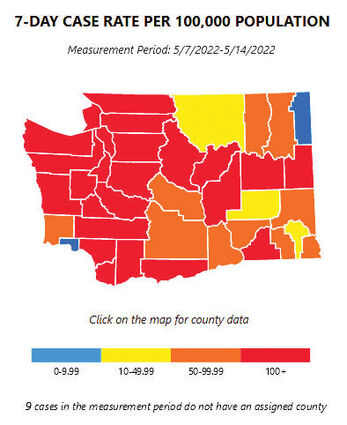 There was one new official case of covid-19 this week, bringing the cumulative total to 314 in Wahkiakum County, with one case considered active.

Wahkiakum and Health and Human Services, which only counts positive results from PCR tests, was awaiting more test results on Tuesday, which means there are potentially more cases. According to the Washington Department of Health, which counts confirmed and probable cases, reports that there have been 538 cases, 32 hospitalizations, and seven deaths attributed to covid-19 in Wahkiakum County.

Disclaimer: With the easy accessibility of at home tests, the actual number of active covid-19 cases and actual cumulative numbers in the county, are hard to know.

"Hospitalizations are starting to increase around the state," WHHS Director Chris Bischoff said. "Most of Washington is now in or approaching the highest category of case rates. It's a great idea to get back in the habit of wearing masks right now. Hopefully people remember how to socially distance as well."

"Monkeypox, avian influenza, and covid-19," he continued. "It feels like nature is trying to tell us something. Of the three, the biggest threat to human health right now is covid-19."

The first case of monkeypox in Washington state was announced on Monday. Bischoff will have more to say later, but for now, he says that more information can be found on the Centers for Disease Control website.

Monkeypox virus symptoms include fever, headache, muscle aches, backache, swollen lymph nodes, chills, exhaustion, and a rash that often begins on the face before spreading to other parts of the body. The illness generally lasts between two to four weeks.

The department's vaccination clinic will be closed on Monday for the Memorial Day holiday and there will not be clinics on June 6 or June 8.

The Moderna vaccine, including a second booster, is available at the Cathlamet Pharmacy. Call 360-795-3691.