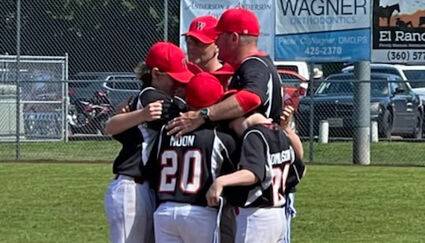 Competing in the Longview Youth Baseball league, the Ohrberg Excavation-sponsored Mini-Mules powered through season play, finishing with an 11-1 overall record and sweeping the Longview league, finishing a perfect 9-0. Saturday's dominating 14-5 win over a Longview team capped the perfect league season and cemented the team as the champions of the league. They received medals for their achievement during the closing ceremonies following the final game.

Throughout the season the team's explosive offense balanced out a dangerous pitching staff and stifling defense. In just 12 games, the team scored 130 runs while only giving up a paltry 28 runs.Coach Brad Moon expressed his appreciation for the dedication of the team during the season. "We had to practice a lot in the rain and temperatures often in the lower 40s. The team continued to work hard together. Their dedication and hard work made their success possible. I am so proud of them and for the way they came together as a team," he said. Moon said he shared coaching responsibilities with Russ Reese and Michael Scott.

Aiden Scott was awarded at closing ceremonies for leading the league in out-of-the-park home runs, which included one walk-off home run in Cathlamet.