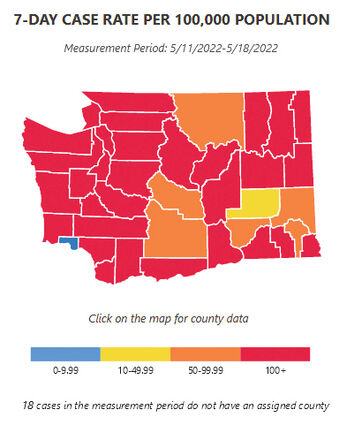 There are reports of covid-19 in the community, but no one has tested positive through official local channels in the last week, so the count at Wahkiakum Health and Human Services (WHHS) stands at 314, with one case considered active.

WHHS only counts cases confirmed by PCR tests. This does not include any positive cases at Wahkiakum School District this year, because they have been using antigen tests.

Meanwhile, the Washington Department of Health (DOH) is tracking PCR and antigen tests, respectively considered confirmed and probable. According to their data, there have been 543 positive cases of covid-19 in the county. They are also reporting 33 hospitalizations and seven deaths attributed to the virus in the county.

Disclaimer: With the easy accessibility of at home tests, the actual number of active covid-19 cases and actual cumulative numbers in the county, are hard to know.

"I have heard of several cases in the community, but we can only report on ones we receive lab confirmation for," WHHS Director Chris Bischoff said.

At some point WHHS will adopt the DOH numbers, but Bischoff is not certain when that will happen.

"Cases are still high regionally including in counties surrounding Wahkiakum," Bischoff said. "Case rates appear to be plateauing in the state, but maintaining mask wearing and social distancing are still very important."

Boosters are now available for children age 5-11 who have concluded their original shot series at least five months ago.

The Moderna vaccine, including a second booster, is available at the Cathlamet Pharmacy. Call 360-795-3691.