Wahkiakum robotics team makes the most of D.C. trip 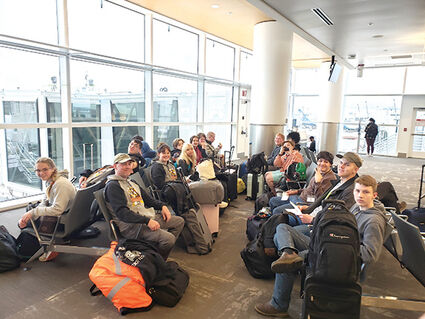 The Wahkiakum Robotics Team waits to board the plane to Washington, D.C. on Sunday.

Updates have been coming in from Ron Wright, advisor to the Wahkiakum High School and 4H Mecha Mules robotics team, which is in Washington D.C. and Maryland this week for a little international robotics competition and a tour of the capitol.

One thing is certain, it's hot.

On Sunday, the team flew from Seattle to Washington D.C. after their initial flight was canceled. No harm done, except their seats were no longer together.

They arrived at their hotel and headed to a nearby store to forage for food, while getting a feel for the neighborhood. After, the group gathered for an evening meeting to make plans for the following day and give out the $50 bills that some kind and anonymous donor wanted the students to have to buy souvenirs.

"Thank you, thank you," Wright wrote in his first update.

On Monday, Smartrip cards were purchased for everyone. They are required for travel on the Metro.

"The Metro station manager was very helpful getting us through that purchasing process and planning our trips," Wright wrote on the second day. "When he asked if our trains back home operate as well as his, he was very surprised to hear my answer, 'Ummm, no, we don't have any.' He replied as if hearing something unheard of: 'You mean you all have to get around by car?' I continued to tell him that we don't even have a single stoplight in our entire county. The look on his face said that he did not believe me. After further discussion, he told us: 'You will see more people at any time on the Capitol Mall than you have in your entire county.'"

The group has learned to navigate turnstiles, taken long escalator rides, and done a lot of walking.

They visited Arlington Cemetery, and an unannounced visit by President Biden to the Tomb of the Unknown Soldier was witnessed by Wright, who had taken a trolley to the site.

"I was sitting about 35 yards from General Milley as he spoke and from President Biden," Wright said. " I assume you can find their speeches online if you want, and they were good, but the really impactful part was to be in this crowd of veterans and Gold Star families and feel the emotions with them as they listened to the speakers."

Unfortunately the crowd and security issues prevented the students, who were walking to the Amphitheater, from being there.

On Tuesday, the group headed to the Capitol Building, and this time, they were a little more prepared for the heat, Wright said.

A tour was provided by staff from Jaime Herrera Beutler's office along with a member of the Capitol sfaff, who added a lot of backrground information.

"The highlight for most of us was standing under the Capitol dome and feeling the majesty of the place," Wright wrote.

The team also enjoyed lunch in the cafeteria, and Wright wholeheartedly recommends the experience to anyone planning to travel to the capitol.

In the evening after it cooled down a bit, the group headed to the National Mall to see the Washington Monument. 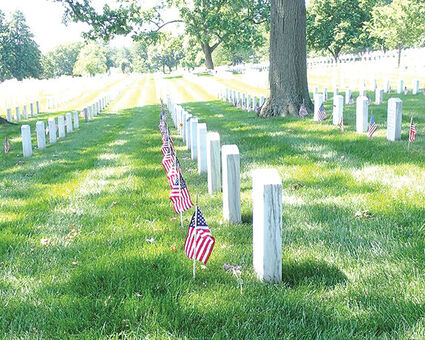 "It is spectacular, day or night, but especially so at night," he wrote. "The grounds of the Mall and surrounding areas are really well kept. For a city that big, that concentrated, it really is a shining example of what can be done. It is hard to figure out how to say this nicely, but I will try: the D.C. area really stands out when we think about the cities we know in the northwest: Seattle or Portland. It just feels like the city itself is saying with its subtle breath, 'I am special, and I am cared for.'"

Wright was happy to report that the students and chaperones were picking up another skill: navigating the subway in an urban environment.

A summary of the coming updates will be printed next week.