Cottage restaurant is a family affair 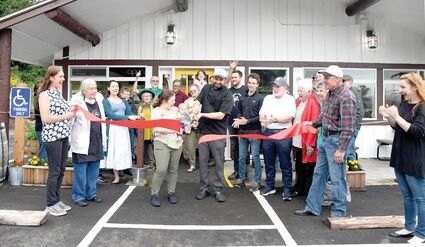 Mora family members did the honors to cut the ribbon at the grand opening of The Cottage Bread and Breakfast last week. Below, Robert and Amanda Mora and Lemon are happy to open their restaurant.

"This was always the dream," Robert Mora said of The Cottage Bread and Breakfast, which opened recently in Cathlamet on the corner of Una Street and SR 4.

It's a perfect partnership for Robert and his wife, Amanda, who have 33 years of experience working in the food industry between them.

Starting as a dishwasher at 16, Robert eventually received a bachelors degree in culinary management from The Art Institute of Los Angeles. He traveled and worked in as many different types of kitchens as he could over the years, working in every position, including head chef, seeking to create an "arsenal of experience."

Amanda, who earned a degree in hotel restaurant management, spent years working in coffee shops, at chains and in mom and pops.

"Coffee house culture was a huge part of my upbringing, I loved being around it," Amanda said. "I loved the hustle and bustle of being in the busy coffee shop in the morning and how you'd see the regulars in the morning."

It translates well to her new role at the front counter of the new restaurant, where the hustle and bustle continue.

"I love being in front of people and helping people and talking to them," she said. "I like being up here where the action is happening."

When their first child, Lemon, was on the way, the pair realized they needed a plan to create stability, so they decided to start with just serving breakfast and lunch at The Cottage.

Robert was looking for a way to make their restaurant stand out, to have a point of pride. One day, he realized he could do that by making their own bread in house. He's been making loaves of country wheat, country white, and artisan bread fresh every day.

"We take a lot of pride in our food," Robert continued. "It's simple home cooking. Comfort food is what we were going for. A fresh breakfast in the morning. Classic lunch. Done well and done simply."

The response has been astounding.

"We've just been overwhelmed with how wonderful everyone has been to us," Robert said. "We had expectations and they were shattered by the town. It was so nice to be received like we are."

"I wake up every day ready to work because of that," he said.

To his delight and surprise, he is struggling to keep cinnamon rolls available throughout the day. They are usually all gone by 10 a.m.

"I love the buzz around them," Robert said. "I'm working every week to make more and more to try and serve more and more. I hate telling people we're out." 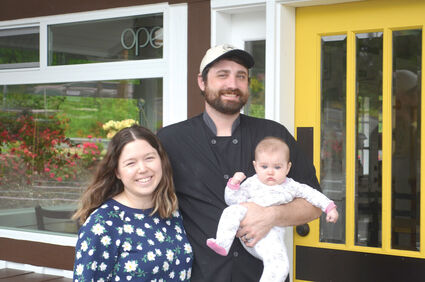 There are traditional offerings for breakfast like eggs, French toast, sourdough pancakes, biscuits and gravy, and more. For lunch, they offer a burger, BLT, macaroni and cheese, a soup, and salad.

The Cottage isn't offering espresso, instead choosing to brew coffee they purchase wholesale from Columbia River Roasting in Astoria.

"I really liked their coffee and I liked talking with them and working with them," Amanda said. "We have a nice breakfast blend, which has a nice juicy bright flavor to it, and the Thundermuck for those who prefer dark, smoky roasts. I wanted it to be somewhat local, and it's just across the river."

The Cottage Bread and Breakfast is open Thursday through Sunday, 7 a.m. to 2:00 p.m.

Things may change as they grow and expand, but the Moras hope customers will grow with them.