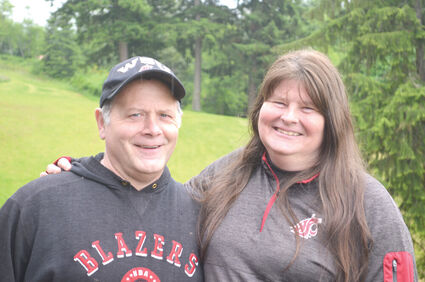 Disc golf is coming to Skyline Golf Course in July.

Robin and Kim (Rodahl) Herren decided to honor Kim's late father Ralph Rodahl by continuing to run Skyline Golf Course, which he built, and they are doing so with a look to the future that makes room for the past.

Loyal members like having a course close to home, but there aren't as many people in the community playing the sport as there used to be.

The Herrens needed to increase revenue. They were looking for a solution when a golfer wondered if they were going to bring back disc golf.

There had been baskets criss-crossing the course about 10 years ago, and right before covid-19 struck, the family had been approached by Sara and Adam Fletcher who own Lucky Mud Disc Golf, a popular course at the end of East Valley Road. The Fletchers were thinking about holding a big tournament in the county at the time, and thought it might be fun to include Skyline.

This time, the Herrens contacted the Fletchers, who by all accounts were pretty enthusiastic.

The Fletchers, avid disc golf players, showed up and and quickly helped design the disc golf course at Skyline. It will flow with the traditional golf holes, allowing participants of each sport to play around each other.

Though the baskets are set to arrive in early July, a layout for nine holes on the bottom half of the course and another nine at the top, for a total of 18 holes has already been prepared.

One of the holes will be a par 5, a rarity in disc golf.

The Herrens laughed. They both golf, but still have much to learn about this similar activity.

Education will be par for this course, as they say. The Herrens are easing into the new adventure, learning as they go.

And they might just find themselves with a whole new set of friends in the process.

"When I posted about the disc golf on Facebook, my phone blew up," Robin said. "People from all over wanting to come play. Seattle, Spokane, Eugene, Springfield, Portland."

Not just wanting to play, it seems. Some were so excited, they were volunteering for work parties.

Kim and Robin remember the joyful days at the course with her mom and dad, Ralph and Juanita. They want people to leave Skyline feeling the same way.

"I think my dad would be supportive," Kim said. "He really liked people to have fun."

Disc golf opens at Skyline Golf Course on July 8 and costs $10 for 18 holes. There will be discs to rent and eventually, merchandise for sale.

A doubles disc golf tournament is being planned.

And because this remains a golf course, there will be a Rodahl Memorial Scramble in honor of Ralph, Juanita, and Randy Rodahl on Sunday, July 17. It is an 18 hole, four person scramble, with a limit of 10 teams. Stop by the clubhouse or call 360-849-9320. Cost is $35 for members and $40 for non-members. Sign up early.