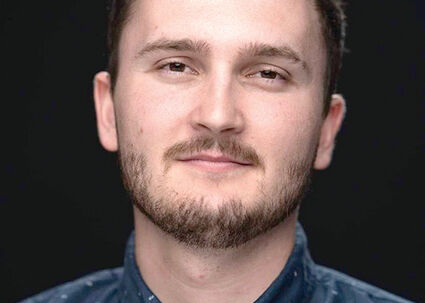 Ben Vasion graduated from Wahkiakum High School in 2013 and is now a film student and an award winning screenwriter. Vasion accepted his Rising Star Award for a screenplay he wrote at the Desertscape International Film Festival in St. George, Utah.

Ben Vasion started screenwriting without knowing how to do it. Now he's won an award for his work in film.

The Wahkiakum High School alum graduated in 2013, and headed to South America for a church mission. Two years later, he returned to the northwest contemplating college and speaking Spanish like a native Argentinean.

Vasion was living in Cathlamet and working a retail job in Kelso when his father called and asked if he would like to join him in St. George, Utah. He could live with him and attend classes at the university nearby.

St. George reminded him of his time in the La Rioja Province in Argentina, with the heat and red rocks, and Vasion, having recently done the math, realized he was only saving about $5 a month after rent and taxes. It was an easy decision.

Unfortunately, heartbreak would follow. His father passed away in December of 2020.

Vasion, who was studying film at the time, was able to use that experience to write The Last Goodbye, which is now a short film. Judges looked at his whole body of work, but it was that screenplay in particular that would garner him the Rising Star Award at the Desertscape International Film Festival in St. George this year.

"I was walking up to accept my award and the guy said he read [a script] that was really heartfelt and had a lot of emotional weight and it was The Last Goodbye, which is the story of how I lost my dad to covid-19," Vasion said. "It's verbatim. It's showing dirty laundry to the world."

Vasion is already working on turning the short into a feature film.

He's been writing for a long time, starting with the comic book hero stories that he gave to his mom. He relished all his creative writing assignments in school.

"Mr. [Don] Cox made me realize I really liked creative writing," Vasion said. "We had to find a picture in our big literature book and create a short story around it. The paper I turned in got the highest grade."

He tried his hand at screenwriting before he went on his mission trip, with just a picture in his mind of what one should look like.

"I had an idea of a feature film I wanted to do one day," Vasion said. "I had 25 pages written before I left and came back and went to school and found out how to actually do it. There are programs that can format it for you so you don't have to hit the space bar a thousand times."

He's written a few scripts for his film classes, and he and a friend, Colby Clanton co-wrote and co-directed a film called Gizmo that played this year at the festival, and is shot from the perspective of a cat that is witnessing the struggles of his owner's relationship.

Vasion loves film, and influences include Richard Linklater, who directed a particular favorite for Vasion, the Before trilogy, as well as Alfonso Cuarón, Alejandro Iñárritu, Bong Joon-Ho and Jim Cummings.

Gizmo and The Last Goodbye are not yet available for viewing online, but The Eagle hopes to provide information and links to the short films so readers can see them when they do become available.

So awesome! I'm excited to see what he does next. Congratulations!