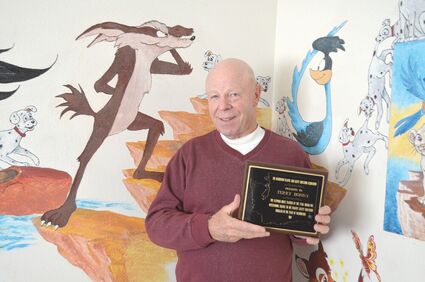 Terry Bonny, who was a teacher, coach, and driving instructor at Wahkiakum High School, passed away in March. On Saturday he will be honored with the first Annual Terry Bonny Fun Run, a two mile/5K run/walk which begins at 8 a.m. at the high school track.

Bonny was a gifted artist, a graceful and talented athlete, and a beloved teacher and coach. When he spoke, you listened, and you'd be glad you did, because what he had to say was likely either wise, or smart, or something that starts with "wise" or "smart."

I was lucky enough to attend Wa-Ki-Hi when Bonny was there and to be on the receiving end of some of his wisdom. I learned about shading and lettering in his art class, gave up long distance running for him in track just because he asked, and loved every hour I spent in his co-ed PE class.

I felt even luckier when I got to chat with a few people on Tuesday who knew him and loved him. What's amazing to me is that I know I hardly put a dent in it. How many lives he must have touched!

Walt LaFontaine, who taught industrial arts at Wahkiakum High School, laughed about all the hours he and Bonny would spend sitting in one spot in the hallway, watching students.

"We used to sit and watch what was going on," LaFontaine said. "The kids would come and visit with us a lot. He got along well with them and so did I. We learned a lot of things from the kids sitting there, because they felt that what they told us wouldn't come back to haunt them."

LaFontaine remembered the hunting trips to eastern Washington, and all the stories they told.

"We had a good time over there," he said.

LaFontaine's wife, Charlene, said that her husband and Bonny created the wooden sign hanging over Main Street near the intersection with SR 4.

"He was so artistic," Charlene said. "In 1981, he took the senior pictures and drew caricatures of all the kids faces and had them up at their senior dance after graduation."

Mary Schroder, who worked in the office, was always greeted with the same song when he walked in to check his mail.

"I worked with him for many years," Schroder said. "He was a great person to work with and I knew he cared about the kids a lot, and they cared about him. He was fun."

Michelle Thomas was a talented multi-sport athlete who graduated in 1985.

"Mr. Bonny was a no excuse, no nonsense coach who brought out the best in all of those who played or ran track for him," Thomas said. "You either worked hard to the point of no return or turned out for a different sport. I personally would never have had the success I had in track if Mr. Bonny was not my coach. He was very knowledgeable about every event and could demonstrate all of them at any time.

"He was an incredible athlete. I remember him doing these amazing dives at the swimming pool during PE class, which of course none of us could replicate. I feel very fortunate to have lived and played in Cathlamet during the height of his teaching career. He is and will be missed."

Her brother Mike, who graduated a few years earlier, remembered the diving and some valuable lessons that Bonny passed on.

"I remember my senior year we were sitting out in the bleachers and I had gotten admitted into West Point. I was nervous and I said I just signed myself up for four years there and five years after that in the Army. That's nine years, that's half my life."

Thomas joined the infantry and watched a lot of people quit, including people he considered to be physically fit.

"What stuck with me, and I wrote to Terry about this, was that in PE class he would never let us stop running," Thomas said. "If he said you have to run laps, you didn't just stop and walk. It was sort of unspoken. I wrote him and said it was the only reason I made it through some of these things. I was sort of trained by Terry. You didn't have to be the fastest, You didn't have to be the all-star, you've just got to finish. That got me through a lot of tough training."

"He was always willing to lend an ear and listen to me," Thomas said. "He was such an unbelievably coordinated person, One day when we were swimming in PE and the pool still had a high dive, he went and did a perfect triple flip thing. Like an Olympic diver. He could do anything. I was so impressed with his athletic talent."

"He was so accomplished at everything," Thomas said. "It wasn't just his physical ability. His ability to motivate as well, was quite impressive."

He was also a kind of father figure to some.

"I got to know Terry when I first moved to Cathlamet when I was 10," Ron Wika, who graduated from WHS in 1987, said. "We were golfing partners. He taught me a whole bunch of stuff about golf. We were friends. We would meet at the Ranch House and we would go hunting together.

"When I was in high school and joined the football team, and was dealing with all the challenges of being a freshman with seniors beating up on you and the hot sun, and doing the doubles? He was there through all of that."

"He had a warm spirit," Wika said. "He was always listening and open to changes I had to his plan on football plays."

"My freshman year he asked me if I could clear 6'0 in the high jump," Wika said. "I can clear that in one step, I told him. I showed him. He said yep, you got it, you're a high jumper!

Wika went on to compete in the event in college, thanks to Bonny's friendship with the track coach at PLU, eventually clearing 6'7"

"He did a lot for me," Wika said. "We all loved Terry Bonny. Everybody has their experiences with him. I had a pretty large one. He expected us to show up on time and work hard. It was clean and pure and perfect. He was my teacher and my friend."

Mike Holten, who graduated in 1987 as well, and is now a teacher, remembers the one time he tried to play a joke on Bonny.

Bonny saw it coming from a mile away.

"I'm not as dumb as I look," Holten tried to tell Bonny.

"His one liners were fantastic," Holten said. "It was hilarious."

Holten remembers this: Bonny was fair, he told you how it was, he was a talented artist and a great teacher, and he had a sign on his desk that read, "A clean desk is a sign of a sick mind."

When Holten got a new pair of sweats, Bonny noticed and celebrated.

"He's one of those teachers I think about once in a while. There is part of him in me, and in my teaching style," Holten said. "He was a really good technical teacher, a really good skills teacher. I learned how to shoot a basketball. He worked with me a whole bunch."

While coaching in years past, Holten has passed on what he calls the Terry Bonny skill set.

"I still remember and I still think about them. It's part of the fabric now," Holten said.

Randy Coleman played football for Bonny in high school, but they ended up as good friends and golfing partners.

I spoke to him on the phone, but I could feel the smile through the line.

"I can't remember what game it was but Terry told me, 'whatever you do don't let that guy get behind you,'" Coleman said. "This guy was fast. He ran right by me."

"To his dying day, he gave me grief about that," Randy said.

That was Bonny, all over.

Mary Simpson Moonen was a young teacher at WHS in the fall of 1983.

"Terry Bonny was the best mentor a teacher right out of college could ask for," she said. He was very patient with me. Of course I had these great big new ideas on how we should run our PE classes. Terry turned down some of my ideas, but I talked him into starting a social dance unit and boy we had fun. I still have students come up to me saying how they still dance. He would not admit it but Terry was a good dancer. Terry taught me so much and I will always cherish our times together."

Lamar Blix graduated from WHS in 1988. He played football and was on the track team.

"Terry was an amazing motivator as a coach for football and track," Blix said. "I will never forget him asking me as I worked out, 'Hey, what do you think so and so from Valley or Onalaska is doing right now to prepare to beat you?' He knew how to get people to work harder without telling them to. He taught and coached that with discipline you could achieve greatness and reach your goals. That has stuck with me to this day."

His wife, Wendy, who graduated a year later, remembered Bonny's big booming voice. Her junior year, she had scratched twice in a throwing event. One more time and there would be no trip to the state meet. He sent someone over with instructions, but she'd already heard it all, Bonny's voice rising above the noisy crowd from deep in the bleachers to reach her out in the field.

"He had a thunderous voice that made you listen no matter how loud he spoke," she said.

Ever the artist, when Wendy and Lamar's son needed instructions for hurdles, Bonny provided pages with precise descriptions and "perfectly drawn illustrations that only Terry could draw."

Wendy laughed as she recounted their many stops at Dairy Queen.

"The man knew where every Dairy Queen was between here and Wenatchee and the state track meet," she said. "We hit almost every one on our trips and he never got tired of them."

Wendy and Lamar spoke as one:

"Terry was a coach, mentor, teacher, and became a lifelong friend to us. Visiting Terry was like going back in time, remembering all the memories he helped make for young athletes especially in track. Shoes that will never be filled," Wendy and Lamar said. "For sure."

Walkers and runners can sign up for the Terry Bonny Fun Run on Saturday from 7-7:45 a.m.

It's $20 per person, $10 for kids 12 and under, and there's a special rate for families of five or more. Entrance includes a T-shirt that includes some of Bonny's artwork. They can be picked up before the run or after the parade in front of Scribbles on Main Street.