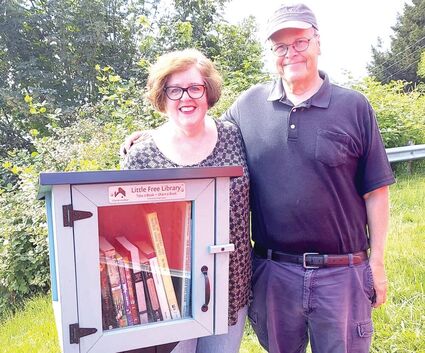 David and Dayle Olson spied their first Little Free Library in Seaside at a library fundraiser. Dayle was smitten with the idea of having their own, but for some reason, David was a little less enthused.

"I would suggest it periodically to David and get a kind of lukewarm response," Dayle said.

Little did she know that her husband would visit Jim Kolberg's Little Free Library on Butler Street one day and come home with his first real keen feeling for the enterprise. To be fair, he picked up a couple books while he was there as well.

"We have a book hoarding disorder," David said. "We've had it for years.

Of course he brought home a couple books. The pair share a great love for literature and libraries.

Dayle didn't wait for him to change his mind. She ordered their own Little Free Library from the non-profit company as a gift for Father's Day.

"Neither of us are handy enough to build something on our own using wood and screws and things," Dayle said. "I bought a set that was preassembled and painted."

She thought it might be a solution for all the books piled up around their home. Instead, she's discovered that it justifies all the book sales.

"It's actually made it worse," Dayle said laughing.

Once the Olsons got the box installed, Dayle wasted no time in filling the box up with books. She checks it once a day.

"I can track what the hot movers are," Dayle said. "What people like, what people are avoiding."

"I wish to say I have nothing to do with this," David said.

He may not be managing a spreadsheet but he's still curious. Like flowers bring bees, the little library creates its own hive of activity.

"I think one of the sweetest moments so far since that was installed," Dayle started. "One of our windows was open and I could hear these children's voices outside. I went to a discreet window where I could peek outside, and sure enough there was a young child running to that book box ahead of their parents, with a sibling trailing behind. Pretty soon the whole family was standing around and everybody was picking out a book."

She is making a real effort the keep middle grade and early reader fiction in their Little Free Library, hoping that she might help some kids develop a love for reading at a young age.

"Ever since we became grandparents, we've gone overboard obtaining children's books, so there will always be children's picture books out there," Dayle said.