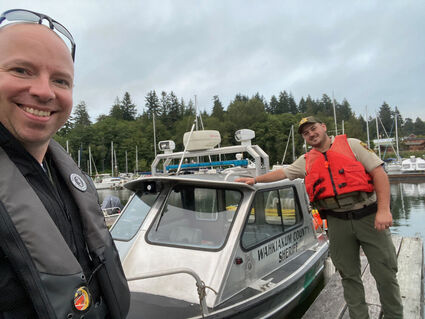 On August 1, around 6:40 p.m., a birdwatching couple at the Skamokawa Resort reported seeing a small skiff capsizing with one person in the water.

Wahkiakum County Sheriff's Department Sgt. John Mason and Deputy Sheriff Lucas Getman responded in the department patrol boat, Sheriff Mark Howie reported, and by about 7:18 p.m., the man was rescued from the middle of the shipping channel near Skamokawa Vista Park in extremely choppy waters.

The man was exhausted, shivering and barely able to tread water in the threatening conditions, Howie said. The skiff was submerged some distance away with only the outboard shaft sticking out of the water. Deputies treated the man with blankets and transported him to the Skamokawa Resort dock where he was treated by local volunteer EMT's. The man was transported to a hospital by the local volunteer ambulance crew.

Shortly after the man was rescued, two full-sized commercial ships traveled up river and through the area of rescue.