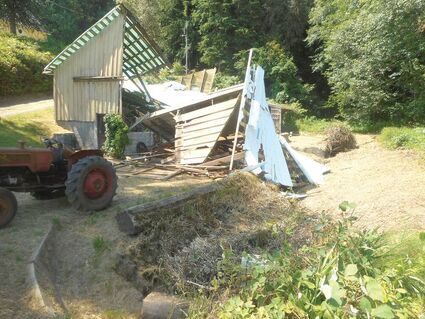 The small shed on Jon Gudmundsen's farm in Grays River came down recently. This was the site of the well known water wheel built by Jon's father, Georg, on the family farm.

I am so sorry to have missed last week's Dispatch. I was hit hard by Covid just after Finn Fest. I am embarrassed to say it was my own fault because being in a big, concentrated crowd from all over the world, one might think I would have considered wearing a mask, but no. Like so many of us who had begun to think our sweet little oasis was forgotten by the Covid critters, I was quite mistaken. I finally called our dependable ambulance at Grays River Fire Department and they transported me to my most favorite hospital, Ocean Beach, in Ilwaco, where the emergency department is always quiet, peaceful and there aren't many there, just me and a few others. I'm doing much better, but still weak. All who have had it tell me it will be awhile before I am up to snuff, but my cough is waning, so I just say, Thanks be to God.

I am so grateful I have air conditioning. I know it's been hot because Ben dog stayed in the house sleeping by his floor fan and checking on me. He comes close and smells my breath and skin and lays close by sometimes. He knows, dogs just know. I laugh when folks say things like, he's just a dog. Sorry, that won't work with me. He's an angel.

Rick Nelson was also ill, but Geri Florek kept the paper alive. One of my favorite history stories is about her in-laws, Joe and Corliss. In high school, Joe was quite smitten with Corliss who lived in Eden Valley. When he wanted to go visit her, he would simply take off running and run from the Elochoman Valley to Eden Valley. I have heard folks say that lots of folks ran through the woods and trails like that many years ago. I'm sure he was strong and stout as so many young men were due to their logging and farm work. But I still think that's about as smitten as any young man could be. Thanks so much, Geri, for having our backs last week.

Before I came down with covid, I did some more interviews for Ken Johnson at Wahkiakum West. They will be shown on the new local TV channel coming soon, along with the six I did last February, so now I've done nine. I so enjoy them and have grown to see them as living history because when I am able to spend 45 minutes with some of our old timers, I hear Carlton Appelo in my ear saying, "Now you've made me happy. By all means, keep going and get as many as you can taped for the generations to come. Folks will be able to see and hear their earlier family members telling their stories." If you have someone you would like to see on the "Take a Break with Karen" shows, please let me know. Last week, my interview with Lyle Haataja was the highlight of my week. I so look forward to doing more.

From Gail Gorley at their farm on Fossil Creek Road: We've enjoyed a couple of visits with the new neighbors up above us. They seem to be very, very nice people. She is going to be the business manager for the Wahkiakum School District this coming year. They moved in December 1 and the only other resident they have met is Steve Blain. Maybe when you're feeling better you might drop by and visit with them. Sue is her name with Ellison being the last name. Thanks, Gail and I promise to go visit them as I hope others will also. The new folks live across from the Gorley farm entrance on the uphill side of the road. Watch out for logging trucks, as always.

While I've been covid bound, I've found some fantastic things on TV. I want to recommend one to everyone who has spent time wondering or worrying about our world, our earth and our children. It's a full movie showing him speaking his own words, Pope Francis. It has such wisdom and guidance for us all. No, I am not a Catholic, but I love and treasure the Pope who named himself after my favorite Saint, Francis of Assisi, who gave everything to the poor and established the Franciscans. I do believe Pope Francis has given us a way of believing and understanding that we certainly have not known for many decades. The Pope movie is beyond wisdom. I think it's divine guidance. I soaked up every word and every image and I will watch it often, I'm sure. It's on Netflix and it's called, "Pope Francis, A Man of His Word."

My one comment this week about FAFF is simply, to Jennifer Boggs and all who led the volunteers who set it up, supported it and cleaned up after it, you gave lifetime memories for folks who would not have had them without your commitment. Thank you for all you did and do.

August 13: Wooden and Classic Boat Festival in Cathlamet at 9 a.m.

August 16: Naselle/GRV School Board meeting canceled due to lack of quorum.

August 19-20: Friends of the Naselle Library book sale at Appelo Archives from 9-4.

August 27: Loggers Reunion and Barbecue at the Appelo Archives Center (on Facebook).

CAP/Thursday Senior Lunches at noon are now inside Rosburg Hall.

Word for the week: Trust.