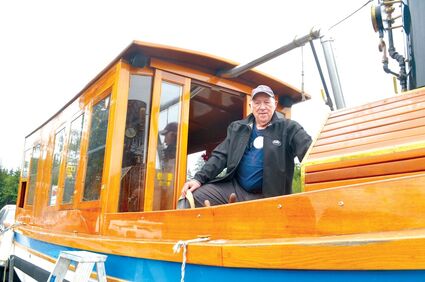 Al Dunlap transitioned from aircraft mechanic to steamboat builder when he retired. He and his wife enjoyed several hours on the boat he built. See more photos at www.waheagle.com.

Northwest Steam Society members rallied round Al Dunlap and the Cheng-Tze, his sternwheeler steamboat whose name is Taiwanese for Child of Honor, on Saturday to get them ready for the trip home after a festive weekend.

True to its name, the vessel and its captain had attempted a rescue the day before, and with some new holes in the hull, it was going to need a bit of love before their next adventure.

A steamboat had gotten caught in the pilings near the waterfront at Elochoman Slough Marina on Friday, according to scuttlebutt, when another steamboat jumped in to help, getting herself in trouble, too.

That's when Dunlap and the Cheng-Tze jumped into action, but they, too, got caught in the pilings, which tore up the hull and almost sank the boat.

These steamboats aren't known for their propulsion, one enthusiast told me.

When I asked Dunlap, who lives in Spokane, what got him involved in the hobby, he had one word for me. Insanity.

Dunlap, a former aircraft mechanic, got excited about steamboats after seeing one in a magazine, and began building the Cheng-Tze around the time he retired.

He shared a story about his wife, who had enjoyed many hours on their boat.

With work no longer taking up so much of his time, his new hobby was much on his mind. Dunlap remembers the day he spoke a wish for welding equipment out loud to his wife, and bemoaned the $1,200 cost.

She walked back into the house. When she returned, she handed him ten $100 bills. Twenty years later, Dunlap was clearly still touched by his wife's gift.

"I got in trouble with other women," Dunlap said, pausing. 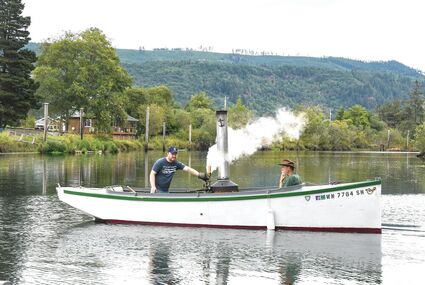 Bruce Heppler let off steam on the SL Skedaddle.

I started to wonder where this story was going. I needn't have worried. He'd only been distracted by something nearby.

It was the story of his generous wife that got him in trouble with other women. They would give him the evil eye as he told their husbands all about it.

The Northwest Steam Society meets every year, bringing enthusiasts from California to Canada together for friendship, fun, and a shared hobby. It's been three years since their last visit and while there were 22 steamboats last time, this year there were just 11. However many there are, they make a joyful noise in Cathlamet, with the sound of tooting horns echoing through town all weekend long.