Local to perform in mystery at Stageworks in Longview 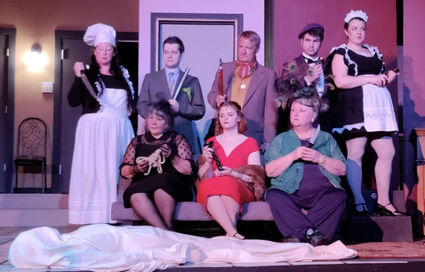 The guests and servants at Boddy Manor wonder which one of them murdered the person under the sheet in "Clue on Stage," a murder mystery farce playing Sept. 9-Oct. 2 at Stageworks NW in Longview. Courtesy photo.

"Clue on Stage," a mystery farce based on the classic board game, will be presented Sept. 9-Oct. 2 at Stageworks Northwest Theatre in downtown Longview. 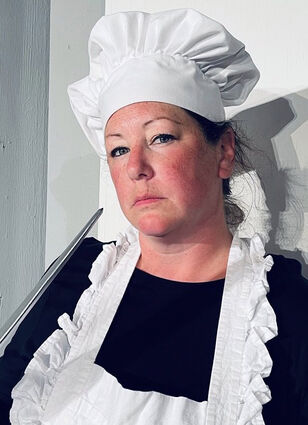 One of the performers is Sarah Lawrence of Cathlamet, who plays the Cook, the Motorist, the Singing Telegram Girl and an FBI agent. This is her debut show with Stageworks.

"Clue" is directed by Janeene Niemi. Others in the cast are William Brauné as Wadsworth the Butler, Shae Coleman as Yvette the French maid, Scarlett Clark as Mrs. Peacock, Dylan Disch as Mr. Green, Corey Farmer as Professor Plum, Jamie Hegstad as Mrs. White, KT Sybrant as Miss Scarlett, Steve Thorpe as Colonel Mustard and Drake Dalgleish as Mr. Boddy.

Tickets are available online at http://www.stageworksnorthwest.com, or at the box office one hour before curtain. For more information, call 360-636-4488.