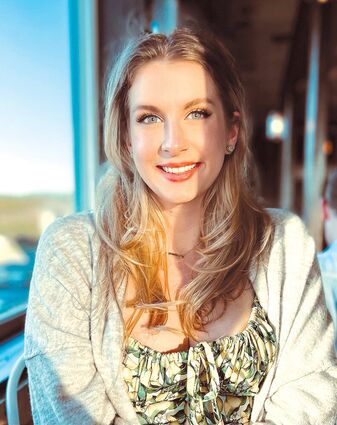 It was her love of the outdoors, which includes kayaking, hiking, and diving, that took her on a path to the art and gives her an appreciation for living in this community.

Free diving and spear fishing are favorite activities, sports she picked up during her early twenties when she lived in Hawaii for a couple years, giving water guided tours on a nature preserve.

"I fell in love with the ocean and made a lot of friends who loved the ocean," Giltner said. "They taught me how to free dive. We would go out every weekend. I tried spear fishing for a long time and finally caught a fish a few weeks ago."

While working as a snorkel guide, she realized she had a knack for working with beginners, especially the ones who were afraid of the ocean. She helped them feel comfortable and safe.

There was something appealing about that, so when she returned to the northwest to be near her family, she began to consider massage, which would allow another avenue for making people feel comfortable and safe.

"I also get to make their quality of life better," Giltner said, "reduce pain for people."

After touring several schools, she decided on a 15 month program at the East West College of the Healing Arts in Portland. A lot of the schools she visited had only one or two teachers, but East West had a full staff of seven or eight.

"I got to learn from a bunch of different people who have different thoughts on things," Giltner said. "It was a broader, better education."

She is thus influenced by a lot of styles, but focuses on Swedish or deep tissue massage. She also practices cupping.

"If someone has tight stuck muscles, that don't have a lot of fluid flowing through them," Giltner explained, "[Cupping] brings all the blood to the surface through those muscles and creates release for people."

At some point she hopes to go to Thailand to learn more about Thai massage.

Everybody tells a story of what someone's daily life looks like, or their injuries, Giltner said.

"It's really fascinating what a body holds on to over time," she added. "Even emotional stuff. We learned how to deal with people having emotional releases on the table. If you have chronic stress and you've never received a massage, and you're holding all that stress in your shoulders, when that finally releases, sometimes people will have an emotional reaction to that. The body does do crazy things."

She remembered watching someone have a really big spasm in their back one day at school. A spasm that they didn't feel.

"It was something in their neck that was letting go and it rippled all the way down their back, through different muscles that were connected, via that tension that was stuck in their neck," Giltner said.

After graduating from the program this spring, Giltner received her license for Oregon and Washington and began working in July.

Her hours are from 9 a.m. to 5 p.m. On Mondays and Fridays she works in a space at Little Island Creamery and on Tuesdays and Thursdays in a studio next to the Cathlamet Post office.

Giltner can be contacted via Facebook at Alia Giltner Massage Therapist or at 971-227-1711.