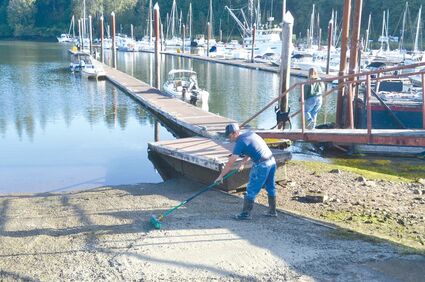 Wahkiakum County Port 1 made much needed repairs to the launch last week during low tide. Boaters who power their boats onto trailers, despite protocol and signage, created the damage. The large holes in the ramp were filled in last Thursday. Port staff, including Maintenance Manager Jerry Nakonsky seen here, hope the fix will last a long time.

With only two commissioners in attendance at the Wahkiakum County Port 1 Board of Commissioners meeting last Thursday, one of them by phone, bids for the C Dock repair and talk about the preliminary budget were tabled.

However, commissioners approved an expenditure of $250 to help pay for a dinner for a coming three day Marine Resources Committee summit in Cathlamet.

"They've been more than generous to Port 1 for years," Commissioner Scott Anderson said.

After a preliminary discussion about bids the port had received to repair C Dock, the matter was tabled until next month when all three commissioners could be in attendance.

Port 1 Manager Todd Souvenir said that the permit to make the repair would expire at the end of February 2023 and said that he had already spoken to someone at the county about securing a loan for the project.

A preliminary budget of $1,329,691 was set for 2023, and the budget and rate hearing was scheduled for the next meeting.

Souvenir asked the commissioners if they would consider moving their monthly meetings to an earlier hour during the winter months, as the port closes daily at 3 p.m. at the end of the summer season. The commissioners agreed, and the meetings will be held a 12 noon on the second Thursday of the month, until the port expands its hours again.

Souvenir said he had been told it was unlikely that the waterfront park was going to be funded by a hoped for grant, and that Mayor David Olson was interested in putting together a committee to discuss ideas for how to use the old lagoons. Anderson agreed to represent the port.

The launch was repaired early on Thursday morning. Souvenir reported that everything had gone smoothly and he expected it to reopen the next day.

He also said that port staff had been checking on the new sewer system weekly since it had been installed.

"We made it throughout the whole summer, even the high peak times, without any issues whatsoever, so that's great news," Souvenir said.

Despite a few cancellations when the fishing season closed early, Labor Day weekend was busy with more than 20 boats from a visiting yacht club, Souvenir said.

"They enjoyed their time in the marina and spent a little money in the community," he said. "August was a fun, busy, good month."