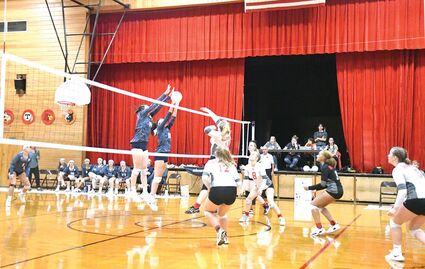 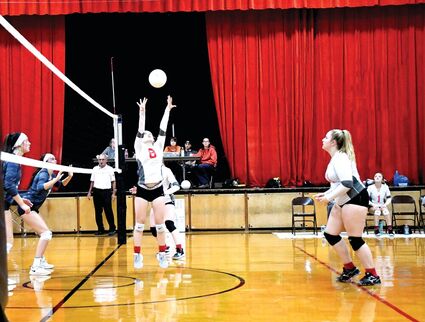 Mule setter Breyonna Montgomery puts the ball up for a Mule hitter.

"Naselle has a strong squad this year, and we knew we would have to take care of the ball pretty well to be successful," Coach Kayli Hurley said. "We had some really great moments but weren't able to string it together long enough to come out on top for more than a set."

Mule standouts for Hurley included Miya Kerstetter, who had four kills and six aces, and "some amazingly aggressive serving," Reigha Niemeyer, who "played a great all around game," and had six digs, two aces, and five kills. Helen Lewis had two kills and "showed growth tonight in her aggressiveness and blocking and great touches at the net," and Breyonna Montgomery had 11 assists and five ace serves.

The Lady Mules hosted Ilwaco on Wednesday, and their next two games will be at home as well, with South Bend on Monday and Onalaska on Tuesday.