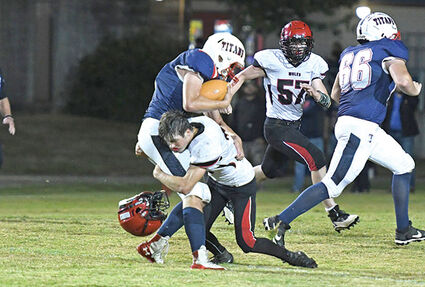 Jacob Johnson loses his helmet while tackling a Titan runner

The Wahkiakum Mule football team ran into another powerhouse last Friday and suffered a 45-6 loss on the road to the Pe Ell/Willapa Valley Titans. 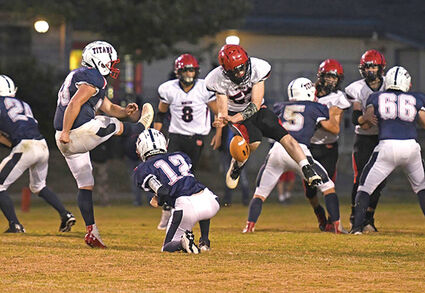 Tanner Collupy breaks through the Titan line to block a conversion kick.

The hosts put two touchdowns on the scoreboard in the first quarter for a 14-0 lead; they added another 14 points in the second to lead 28-0 at halftime.

Zakk Carlson put the Mules on the scoreboard with a 57-yard run in the fourth quarter.

The Mules gained 276 yards on the ground, with Carlson gaining 110. Cooper Carlson had 32 yards and Dominic Curl picked up 24.

The Mules head to Westport, WA, this Friday to tangle with the Ocosta Wildcats.