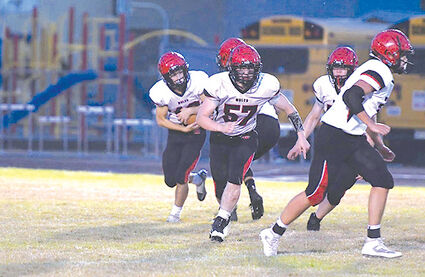 Aimon Lee, 57, and other blockers lead a power sweep run in the Mules' 51-0 win over Ocosta last Friday.

The Wahkiakum Mule football team went on the road and steamrolled the Ocosta Wildcats 51-0 in a non-league game last Friday.

The Mules led 13 after one quarter as Zakk Carlson scored on runs of five and 25 yards. Nathan Garrett kicked a conversion.

Thirteen more points followed in the second quarter. Brodie Avalon scored on a 13-yard run and Dominic Curl on a 12-yard run. Garrett kicked another conversion for a 26-0 halftime lead.

Braden Avalon put the Mules up 32-0 with a 65-yard run to start the third quarter. Cooper Carlson scored from 11 yards out; Zakk Carlson closed the quarter on a 24-yard touchdown. 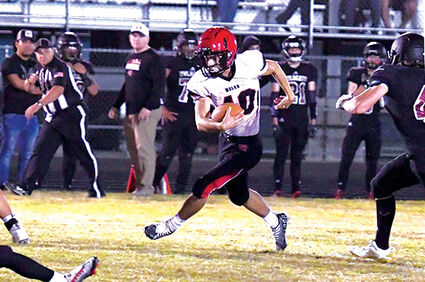 Aimon Lee, 57, and other blockers lead a power sweep run in the Mules' 51-0 win over Ocosta last Friday.

Garrett scored on a 35-yard run in the fourth quarter, and Curl kicked the conversion for the 51-0 final score.

Brodie Avalon completed five of 10 passes for 60 yards. Kyler Sause caught three for 26 yards; Jacob Johnson one for 29 yards and Jayden Stoddard one for one yard.