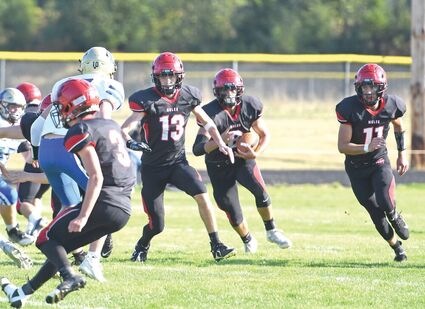 The Adna Pirates came to Cathlamet last Friday and left with a 12-6 win in a defensive battle with the Wahkiakum Mule football team.

After a scoreless first quarter, the Pirates took the lead on a 2-yard run. The conversion kick failed, leaving Adna up 6-0.

Zakk Carlson took the ball on the Adna kickoff and returned it 85 yards for a touchdown to tie the game. Dominic Curl kicked the conversion to give the Mules a 7-6 halftime lead.

Adna poked the ball over the goal line on another 2-yard run in the third quarter to lead 12-7. The Pirates' two-point conversion try failed, and that score stood for the rest of the game.

The Mules were able to generate just 168 yards on offense. Statistics for Adna were incomplete.

Zakk Carlson gained 75 yards on 22 runs for the Mules. Curl had 15 and Brodie Avalon 10. Avalon completed four of nine passes for 81 yards with one interception. Curl made three receptions for 79 yards; Kyler Sause caught a 2-yard pass.

Landon Nielsen led the team in tackles with three solos and five assists. Carlson was 3/4 with a tackle for loss; Tanner Collupy 2/4 and Curl 2/1.