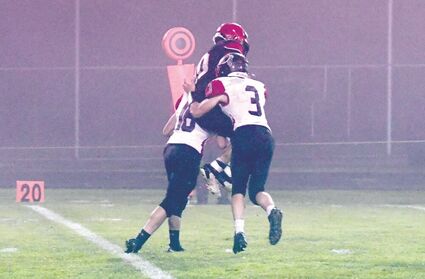 Zakk Carlson is sandwiched as he hauls in a Brodie Avalon pass.

Toledo led 21-0 as the second quarter was coming to an end when the Mules struck back.

Mule quarterback Brodie Avalon put the ball in the air, and Kyler Sause caught the pass and ran for a 45-yard touchdown. A two-point conversion kick make the scored 21-8 at halftime. 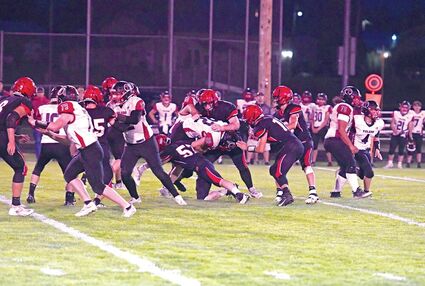 Toledo started the second half with two touchdowns to boost their lead to 34-8. On the kickoff following the second score, Dominic Curl fielded the ball and returned it for a 65-yard Mule touchdown. The conversion kick failed, leaving the score 34-14.

That, however, was as close as the Mules would get. The visitors scored the next 13 points to claim the victory.

The 2-4 Mules head to Kalama this Friday to take on the 1-4 Chinooks. Kalama has lost to undefeated Class 2B Onalaska and 3 Class 2A teams.