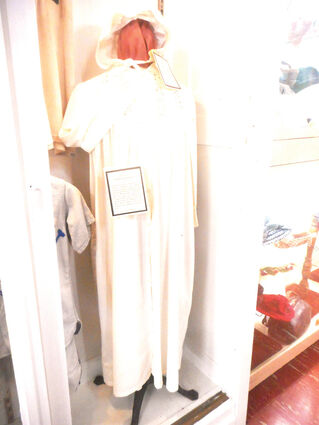 This bridal night gown is on display at the Wahkiakum County Museum in Cathlamet.

Good morning! Last year my garage flooded twice, so this year I searched for help to control the high volume of water coming down the hill behind my garage. My neighbor, Bob Torppa, is known as a top operator and I know how true that is, but his equipment is too big to get into the narrow area where the stream hits the culvert carrying water down to the county's culvert. So, I hired Tyson Vogeler who has an excavator that's "just the right size," to see what he could do to help the situation. He brought his smaller excavator over and reworked the whole area. He cleared it, shaped it, and armored it with the best rock. Hopefully, this will take care of it. Aren't we grateful to have so many folks who can do dirt work, cut and shape our trees and help us with our water challenges? Not every Seattleite has neighbors with big machines in their yards.

Photo of the Week: While visiting the County Museum in Cathlamet, I was struck by the bridal night gown. I took a photo because I couldn't resist preserving it for the Dispatch. It's such a great place to visit. Between that museum and the Archives Center, we have access to remarkable representative materials of our area's unique history. Spend time in both and enjoy!

From Ron Forberg (via facebook): Until the mid-1930s when a road was cut through the forest over KM Mountain that became SR4, towns and communities in the West end of Wahkiakum County were separated from Skamokawa and the county seat of Cathlamet. The primary means of transportation were boats plying Grays River, Deep River, and Grays Bay on the Columbia River. The Butte, a mail boat from Astoria, crossed the Columbia at high tide to transport people and supplies to Meserve's Store in Grays River and the Rosburg Store downriver. The General Washington mailboat serviced Appelo's Store and Shamrock Hotel in Deep River, and Frankfort on an inlet on the Columbia at Portuguese Point. Crooked Creek in Eden Valley and fishing villages of Altoona, Dahlia and Pillar Rock took care of themselves with their Columbia River Gillnet Boats.

As such, the idea of an "outside world" and "outsiders" was still somewhat entrenched in the local consciousness when my parents, Walt & Elaine Forberg, moved from Longview with their three children, Ron, Joy and Allan to the Bob Torppa Sr. Dairy Farm in Grays River Valley in August 1953. In the upper valley, names of neighbors were Sorenson, Pearson, King, Harrison, Calhoun, Wendelin, Axmaker. However, when I entered the Grays River Valley Elementary School at Rosburg for a combined class of 3rd and 4th grades, I was surrounded by names like Wirkkala, Bakkila, Nikkila, Raistakka, Koski, Salmi and more Torppas. Returning from school one afternoon, I asked my mother, "Do we still live in America?"

After working at Torppa's Dairy, then as a mechanic for Cecil Axmaker's Union 76 in Grays River, Dad was hired by Burton Appelo as serviceman for Appelo's Appliance Center in Naselle. As a Maytag dealer of modern washers and dryers, Dad had to rewire utility rooms with 220 volt outlets in houses all over the west end of Wahkiakum County and Naselle River Valley of Pacific County. While working, he often shared his spiritual experience. Although raised in a religious home of a major denomination, he was unaware the issue wasn't religion but a personal relationship with God through the Lord Jesus Christ. It was a transformed alcoholic bum who'd lived on skid rows of Chicago, Minneapolis and Milwaukee for seventeen years named Ray Standley, who told Dad he needed to be "born again" and study the Bible for himself.

While rewiring a utility room on Raistakka Road in Rosburg, Dad shared his story with a young thirty-two year old Finnish mother of five children. Several weeks later, this mother wrote Dad a one-page letter containing a phrase, "Our hearts are starved for the Word of God." Her letter began a home Bible study on the Koski farm in the upper Deep River Valley that moved to the Rosburg Community Hall, then to a home on Grays River's Loop Road and it became the Valley Bible Church that is now located on SR4 near Swenson's Curve in Rosburg. (Thanks, Ron)

Calendar of Events: Here is everything I know about till the end of December. Get out your calendar and warm up your pens! Or cut out and put on refrigerator. Hope it's all correct!

October 29: State Patrol office in Naselle has candy for kids from 3-6.

November 7: Put your clocks back one hour.

November 19: American Legion Ladies will sponsor a BINGO at Rosburg Hall at 6 p.m.

The next Wednesday Senior Lunch will be on October 19 at Rosburg Hall at noon.

Word for the week: Faith