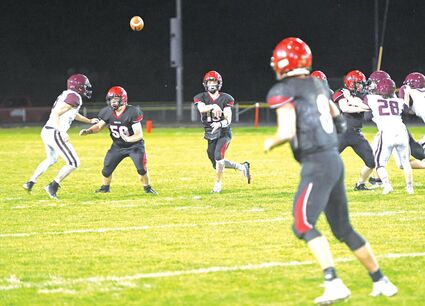 Normally a running back, Zakkary Carlson took on passing duties for the Mules last Friday, throwing this completion to Dominic Curl.

The visitors caught the Mules in their own endzone to score a two-point safety early in the game.

The Mules responded with Zakkary Carlson scoring on a 21-yard touchdown run. The conversion failed, leaving the Mules ahead 6-2.

The Mules led 12-2 at halftime after Dominic Curl returned a recovered fumble 37 yards for a touchdown. The conversion kick failed.

In the third quarter, Stevenson battled back with a 37-yard field goal and 25-yard touchdown pass play to cut the Mule lead to 12-11. 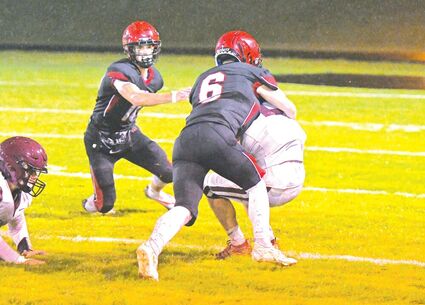 Cooper Carlson tackles a Stevenson player for a loss on the play.

A 32-yard field goal in the fourth quarter gave the Bulldogs the 14-12 victory.

The Mules gained 64 yards on the ground and 36 in the air. Stevenson had 72 rushing yards and 49 passing yards.

The 2-6 Mules head to 3-5 Onalaska this Friday. The Loggers lost 7-6 to the Adna Pirates last week.