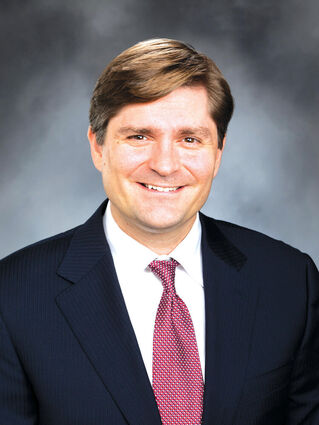 Washington State Treasurer Mike Pellicciotti is nearing the end of his 39 county tour of the state, and on Tuesday, he made his 38th visit, stopping in Cathlamet briefly to talk to The Wahkiakum County Eagle and Wahkiakum County Treasurer Tammy Peterson.

He was excited to talk about Washington Future Fund, a baby bonds proposal he is putting forward, which is focused on rural economic development, a subject he says he earned a masters in at Gonzaga University while attending law school.

"Part of this Washington Future Fund is to set money aside and invest it for the next two decades, and take those proceeds and make it so those children who were born through Apple Health funded birth, which statewide is 47 percent of births," Pellicciotti said. "In Wahkiakum County, it would be on the higher end in terms of beneficiaries of the program. We would set aside the money, invest for two decades and as adults, depending on when they claim it, it could be used for one of three wealth building tools, education pursuits including trades and apprenticeships, to start a business, or a down payment for property attainment."

Pellicciotti considers it a way to "interrupt those cycles of generational poverty" and to inject "money into communities that in terms of capital would be really impactful in generating economic growth in those communities."

He was also in Cathlamet to promote what he called a Local Program, where a variety of local projects in a community, like a need for a fire truck or ambulance married with a need at city hall or a school, for example, would be pooled together and the treasurer's office could help the group achieve more favorable interest rates, in order to pass on savings to local governments, especially, he said, in rural communities.

The state treasurer has three main areas of responsibility, Pellicciotti explained, to help manage over $30 billion in state investments, to achieve favorable interest rates on bonds, which he described as things like the loans the state might take out for transportation projects, or other capital development building projects.

"I work hard to achieve low interest rates," he said.

Finally, he said he pretty much serves as the state's banker.

"I write the checks. Money in, money out. Our office handles about a third of a trillion dollars a year in cash flow," Pellicciotti said.

With those duties Pellicciotti serves on various boards and commissions that handle different state financing issues like pensions, small business financing, and more.

It was while working on policies that he came to realize that while some people had access to capital, there were many who didn't. Capital which would give them the tools or put them on a trajectory for wealth generation.

Which brought Pellicciotti back around to his hopes for the Washington Future Fund.

"It is a great way to reserve money, it's responsible," he said, "while at the same time it's meeting future needs the state would have."

"I love this job," Pellicciotti said. "I just think so much of the work of the office really provides an infrastructure for good government."

"I've been raising the alarm for well over a year and a half now that I thought inflation would not be transitory," he said. "As a result of higher inflation we would see interest rates increase. So my focus, especially last year, was to refinance every bit of debt that we could legally refinance with the state. We've done that and saved the people of the State of Washington over $385 million."

And he added, the state has been able to maintain their AAA credit rating, a top rating issued by Moodys, which has helped with the refinancing and allows the state to issue bonds at the lowest rate for taxpayers.