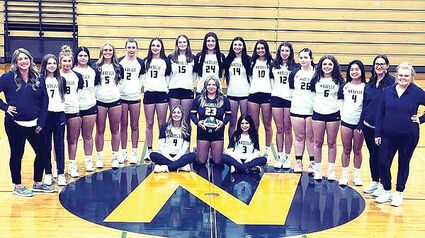 The Naselle Lady Comet volleyball team will compete in the state Class 1B tournament this week. Courtesy photo.

The Naselle Comet volleyball team is headed to the 1B state tournament at the Yakima Valley SunDome on November 10-11 after taking second in the district tournament on Saturday.

The team started the district tournament on Thursday with a three set win against Columbia Adventist. On Saturday, they beat Taholah in three sets and advanced to the district championship game against Mossyrock, which they would lose later that day in four sets.

Naselle begins play in Yakima on November 10 at 1:30 p.m. against the winner of the Columbia Adventist/Moses Lake Covenant Christian game, which will be played earlier that day.

Game updates will be posted on The Wahkiakum Eagle Sports Report page on Facebook.