The Naselle Comette volleyball team placed third overall in the state Class B1 volleyball tournament. They defeated Moses Lake Christian 3-0 in the first round and Odessa 3-0 in the quarterfinal game. They faced undefeated and #1 ranked Oakesdale in the semifinal round. They lost 3-0 but played hard and competitively. Oakesdale did not lose a single game all year--including the state championship match against Mossyrock and matches against bigger schools. Our girls bounced back and beat #3 ranked Mary Walker 3-2 to claim third place overall. Kaylin Shrives, Brynn Tarabochia, and Delaney Kragerud received sportsmanship awards. The Comet football team hosted Almira-Coulee-Hartline in the first round of the state playoff in South Bend on Saturday. ACH was ranked 9th and Naselle ranked 8th. The Comets won 64-6. It was 52-0 at halftime and teams had a running clock from mid-second quarter on. Luke Johnson and Kolten Lindstrom each ran for nearly 200 yards and scored four touchdowns apiece. The Comets will play #1 ranked and undefeated Odessa in a state quarterfinal game at noon on Saturday in Moses Lake.--Justin Laine, principal. Courtesy photo.

FAFF: The Finns at FAFF sent me a couple changes for their upcoming events: The Christmas Tree Lighting will be on December 3 and the baking classes have been cancelled. I am hoping a few Finns will send me some Christmas childhood memories so I can include them in The Eagle as we get closer to Christmas. If you have a story, just send me three to five hundred word stories that will help all of us remember our early Christmas holidays. Last weekend was a busy one for sure with the American Legion breakfast, the Naselle Lutheran Bazaar and the Appelo Archives' banquet. All had good turnouts and great weather, too! The Deep River Church looks great with its fresh white paint and new steeple. I hope the Christmas concert has a packed house on December 4 and the weather is good. Also, be sure to follow the FAFF on their facebook page for the Community Center on facebook at: nasellecommunitycenter (group).

GRHED: The Grays River Habitat Enhancement District met on November 9 with 16 in attendance at Johnson Park. The meetings have been moved to Wednesdays so the next one will be on Wednesday, December 14 at 5:30 at Johnson Park. Discussions during the November meeting included the flood map for Grays River, Susan Amala's project on her dike and a presentation from Allan Whiting regarding how he could help the district with updating the map of culverts and tidegates, and gathering names of landowners to update a data base of owners and their land. For many years, it was assumed the assessor's office updated that landowner list, but recent information shows no one has been updating the list so it is out of date as of many years ago. Having a database showing current landowners, their contact information and what land is theirs would be very helpful in the future as projects are identified and prioritized. Judy Johnson did a fine job running the meeting and Don Dyer put together an impressive budget to present to the county commissioners. It is still unknown what will happen about the naming of a third commissioner for this board, but hopefully the County commissioners will give us some information soon so there is another person helping Judy and Don with moving forward. Judy reported that they will look over Allan Whiting's proposals and bring them forward at the next meeting. It was an energetic group in attendance last week and discussions were lively and exciting to watch. Pete Barber from the Cowlitz Tribe reported on local projects they've been working on. A forty-acre area was identified high up the Grays where they are placing trees with roots attached to develop log jams in the river. The tribe has a goal of helping the flood currents slow down to reduce the amount of silt coming down to the lower river. They found a landowner with trees available and that work is now completed. The tribe is working to slow the sediment flow so that hopefully it all won't wash down into the lower river building up gravel at various points. Several sites have been identified where the river is being blocked by gravel bars causing higher water. Also, the gauge located at Ahlberg Park has been identified as "not working" and that was discussed. The Grange owns the park and has been working with state agencies to move the electronics board to another area on the Sorenson side, but full information was not available as of the meeting. Hopefully, Krist Novoselic will be able to help with more information on the gauge since he is very active with the Grange. Information on the stream gauge is important because many Grays landowners depend on the gauge to determine the height of flood predictions on the gauge's web site. Having the district up and running with energy and focus makes for great meetings. Come join us if you are a landowner along the Grays. Bring any questions and concerns.

SCHOOL SURVEYS DUE: The Naselle/Grays River Valley School District sent out surveys to registered voters in the district with requests that they be returned by November 15. If you still have your survey, please answer the questions and send back to the district in the pre-stamped envelopes. You can use the back of the page if you'd like and send it in anonymously, as I did. The survey is an important tool for board members to use in their strategic planning. The information is very helpful as they make important decisions for the school. You are always welcome at the school board meetings held on the third Tuesday of each month at 6:30. The next meeting is on December 20 in the school's library. 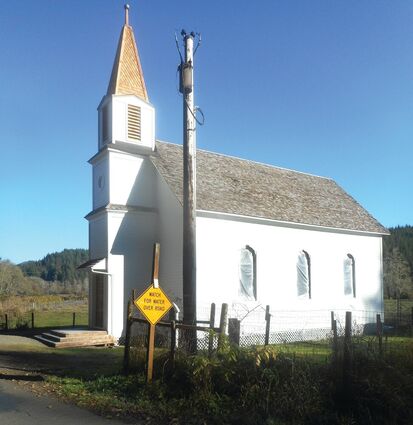 Renovation is complete for the Deep River Church, except for new windows on order. Rich in history and beloved by locals, it will be open for the annual Christmas Concert on December 4 at 1 p.m. Thanks to Krist Novoselic and Eva Malerich for leading the renovation project. Photo by Karen Bertroch.

December 18: Tour of community lights – turn your lights on!