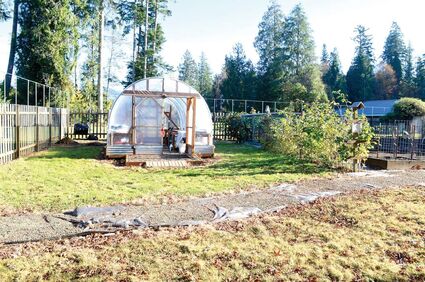 The Wahkiakum Community Garden in Cathlamet's Erickson Park is getting some upgrades thanks to volunteers and Wahkiakum Health and Human Services staff who were able to secure funding from the National Association of Chronic Disease Directors, through a grant that supports community level work related to Building Resiliency in Communities (BRIC).

Thanks to funding secured by Wahkiakum Health and Human Services and volunteers at the Wahkiakum Community Garden, as well as some other Good Samaritans, there will be more fresh produce available at local food banks for a longer period of time each year, as part of a combined effort to combat food insecurity in our community.

"It's always a question with us, regarding what we supply to the food banks," Wahkiakum Community Garden Volunteer Chris Holmes said. "Two questions, are we supplying what they need or what people will take and use, and do they have enough?"

There are several plots in the community garden for people who want to grow their own produce, but for the Master Gardeners and other volunteers who log hundreds of hours there each year, their primary goal-to grow fresh produce for local food banks-continues to evolve.

At one time, volunteers were taking all their produce to the Wahkiakum Food Bank in the Elochoman, but thanks to some people at Wahkiakum Health and Human Services, the Westend Food Pantry is also receiving fresh produce during the growing season.

WHHS community Services Manager Julie Johnston, along with Heather Odom, a healthy community specialist, were able to secure funds to help the garden from the National Association of Chronic Disease Directors (NACDD) through a public health grant that supports community level work related to Building Resiliency in Communities (BRIC).

"One of the things we noticed with covid-19," Johnston said, "the food banks were getting so much food it was going to waste. That went away. The Westend started complaining that they weren't getting as much anymore and people were getting used to it."

One of their goals was to improve equitable access to healthy food and they realized that while the community garden was supplying vegetables to one of the local pantries for many seasons now, none were getting out to the Westend.

When Johnston and Odom approached the garden volunteers about the matter, the volunteers quickly stepped up, but they requested totes to transport produce. The totes were purchased through the grant, and then WHHS worked with Wahkiakum on the Move to deliver the produce laden totes to the food pantry while traveling on their route to Naselle.

"It took a bit of coordinating," Johnston said, "but produce was successfully transported to the Westend Food Pantry throughout the summer."

Every volunteer will be the first to tell you they are getting older, and while they want to do more, they want to do it more efficiently, and this is one way the grant is helping.

"It's all being done on their volunteer time, so anything we could do to make it more automated," Odom said.

The number of volunteer hours in this grow season was easily over 1,000, she added.

"We've tried to improve productivity through improving our watering system, using less water but better use of it," Holmes said. "This year we decided, looking at two things, to increase productivity, and because most of us operating the garden are getting older, trying to find ways to make it more usable for plot owners too."

They proposed expanding the number of raised beds in the volunteers' portion of the garden while also adding raised beds for other people utilizing the garden.

And thanks to the grant, they were able to bring electricity to the hoop house, expanding their grow season, along with the use of heated propagation mats that will allow them to start seeds sooner.

"This went well with our goal," Johnston said, "we worked with them to come up with a wish list and used this grant money to fund their needs."

Besides funding the electrical work, the grant paid for the lumber for the 10-11 new raised beds, hardware cloth to place on the bottom of the beds to protect against gophers and more, grow mats, soaker hose for the new beds, three new heavy duty barrows and two nice garden carts.

"They really invested in it, so our plans are to significantly increase our production of vegetables and increase availability and utilization of plots," Holmes said.

As for other partners, Holmes was grateful to the Town of Cathlamet.

"David McNally (town public works director) had his crew help us getting the hook up done and excavating right up at the pavilion building where we tapped into the electrical," he said. "They were super helpful with all that kind of stuff."

"The town council was very supportive when we brought this up," he added. "Dave Olson said so long as the town doesn't have to pay for the project, we're all for it."

He also talked about the addition of the composting and material bins nearby, and the other people who have helped along the way.

"Sam Longtain did all the hauling and placement for free for that," Holmes said. "He used his truck and excavator to do all that kind of stuff." 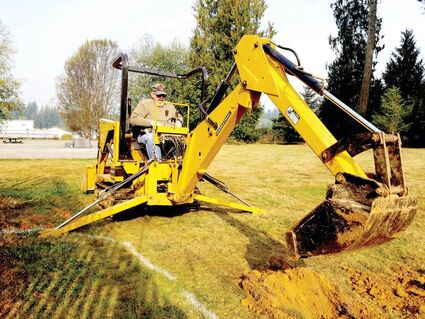 A volunteer who wanted to remain anonymous brought his backhoe to help with community garden improvements.

"Scott Anderson at the shake mill sold us the ecology blocks for what he paid for them 20-30 years ago," Holmes added. "It was a quarter of what we were going to have to pay for the blocks alone. The closest place we could get them was Woodland, so we would have paid through the nose for trucking."

"It's all going back into the community," Holmes said of the grant, the expansion, the volunteer hours. "It's feeding people, helping them stay healthy, and building a sense of community. This year, even given the weird weather, we did about 1,500 pounds."

Odom described the number of pounds of produce as "astronomical."

"It should be even more next year," she added. "This grant has supported many programs. It came out of covid-19. One of the good things."